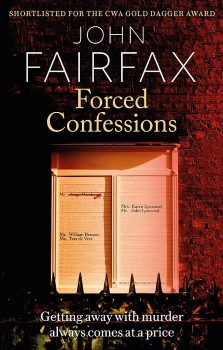 William Benson defends a man against a charge of murder, while his friends investigate the circumstances behind his own conviction, for which he served 11 years in jail.

This book is the third in a series featuring William Benson and brings to a conclusion the mystery about the death that led to his prison sentence. Benson served 11 years for the murder of Paul Harbeton; following the conviction he battled to become a barrister and despite public opprobrium he eventually succeeded.

He was assisted in his struggle by Helen Camberley, the QC who defended him in court, and by an anonymous benefactor who funded his efforts. On Helen’s advice he has avoided enquiry into who really killed Harbeson and instead focussed his efforts on representing those requiring a defence in court against serious charges. His dedication to the accused and an almost uncanny sense for the truth makes him a formidable advocate.

His latest case arises from the death of Jorge Menderez, a Spanish doctor. Menderez was unsettled and had turned to counsellor Karen Lynwood for help. The prosecution claim that when the relationship turned into a more personal one, Karen’s husband John was driven to murder, with Karen liable after the event. The circumstances and emails between the parties are capable of other interpretation, but the Lynwoods will say very little, and without some alternative explanation Benson fears he will lose the case.

Despite feeling that there is much about the circumstances that eludes him, Benson masterfully undermines most of the prosecution witnesses to the extent that the case against Karen Lynwood is thrown out. Her husband is still vulnerable, however, until a surprise witness makes herself available to give evidence about matters which occurred in Franco’s Spain decades ago.

Meanwhile, solicitor Tess de Vere, who has been close to Benson since his own trial, and her friend Sally, have been unearthing more information about Harbeson’s death. A bracelet was found by the body, and ownership has been traced back to a close relative of Richard Merrington, the Home Secretary and the man who loudly opposed Benson’s admission to the bar. The identity of Benson’s secret benefactor is also revealed.

The bare outline of the story does little to convey the strong emotions in play. The case involving the Lynwoods proves to have aspects that explain the desperate anxiety of the accused to conceal the truth even at the expense of a long prison term.

In the matter of his own case, Benson has been living in a kind of suspended animation: obliged to confess guilt to progress with his life, he has been alienated from his father and brother, and vulnerable to attacks from the Harbeson family and others. Even while struggling with all this, he still manages to scintillate in court. As with previous books in the series, the author fills the pages with incident.