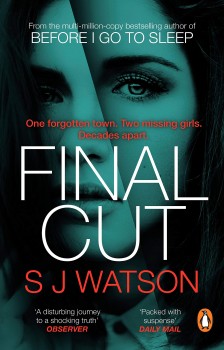 Successful documentary film maker Alex returns to the run-down seaside town where she was born to uncover its extraordinary and chilling secrets.

If you’ve read SJ Watson’s debut Before I Go to Sleep or even watched the film adaptation starring Nicole Kidman and Colin Firth, you may find yourself a shade confused by his latest effort.

Perhaps I was expecting more from it, but I found myself indifferent to the majority of this slow-moving story with its jumps between past and present and a huge cast of characters making it difficult to follow.

Alex, a successful documentary film maker, despite a past involving physical and mental abuse, drugs and sexual exploitation, returns to the run-down Yorkshire seaside town where she grew up. Blackwood Bay was once a busy seaside destination. But with the decline in tourism and a couple of economic crashes, it’s now a near-ghost town – a place where nothing exciting ever happens.

But Blackwood Bay is home to an extraordinary secret. Ten years before a local teenage girl apparently committed suicide under mysterious circumstances and two of her closest friends just disappeared and have never been heard from since.

The local community is instantly deeply suspicious of Alex’s intentions. As she investigates fragments of her past start to come back to haunt her. Through all the suspense and menace, Watson tries to tie the strands of his story of Alex’s disturbing journey to an ending which will reveal the shocking truth.

I didn’t understand many of the characters and found it hard to like any – including Alex herself. The premise of the book is good, but it is presented in such a slapdash manner. These sorts of crimes have become increasingly prevalent in modern society, but because the characters, particularly the trio of male protagonists, are so sketchily presented I found it difficult to become invested in what became an increasingly unbelievable story.

The big reveal was hardly a surprise – any experienced crime reader will have recognised the villain long before the denouement. Watson’s writing flair and his ability to create a visual, authentic and atmospheric setting fail to disguise what is, in my opinion, a weak and inconsistent story.