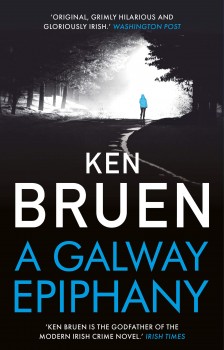 Maverick PI Jack Taylor is finally hoping for a quiet retirement. But when he emerges from a coma after being hit by a truck, the incident is being hailed as a miracle and the children who tended him as saints. But he isn't the only one looking for the kids, who have gone missing ...

Reading Ken Bruen’s Jack Taylor series is like having someone loom over you menacingly while you down three neat shots of whiskey. But it also feels like you’re staring, rapt, at one of those saturated colour medieval paintings teeming with saints, fiends and demons.

As usual, A Galway Epiphany shows you a side of the city that no doubt turns the tourist office and the council a not very delicate shade of puce. Bruen’s Ireland is set unerringly in the present, with the effects of Brexit from the other side of the Irish Sea, the struggling health service and the drugs flooding Galway.

Jack, who’s been knocked down and got up again more times than a Chumbawamba song, is hoping for a quiet retirement. But then he wakes up in hospital after being hit by a truck to discover that his survival has been tagged a miracle and that the children who tended him are being hailed as saints.

The kids, though, have disappeared. And Jack’s not the only person looking for them …

Also lurking around are dodgy nuns, arsonists and wife-beaters – pretty much a typical cast where Jack’s concerned!

Bruen’s books are an acquired taste, but once you’re hooked on the spare, darkly humorous writing – emerald noir sounds far too twee – you realise that less is almost always more when it comes to prime storytelling. The deadpan throwaway lines are in a class of their own: “I said aloud, ‘Not my problem.’ Five minutes later I was hit by a truck. A big one.”

It’s a reasonable question to ask when you’re reading this series as to how low a man can fall. Jack has more injuries and disabilities than an episode of Casualty, countless friends are dead and you can pretty much guarantee that any new friendship won’t end well.

What the series shows is that devils come in different guises – and you don’t have to be religious to settle on that thought. The devils may be in human form, but they’re also inside Jack’s teeming head.

Plot is almost always secondary in a Bruen book and it’s rarely linear either. Sometimes it looks like a thread has been dropped, only to reappear at the oddest moments. It gives the narrative an almost random, stream of consciousness feel. But the taut, clipped language is never self-indulgent.

The books always feature quotes introducing each chapter. In the past they’ve often been from novels or songs, both of which play key parts in Jack’s eclectic life. This time there’s Freud, victim impact statements to police, Salman Rushdie, Gustave Flaubert, Karl Lagerfeld, Keith Richards, Edie Campbell and a load more I had to Google (the Rev Alexander F Shand – who he?!) I’d love to browse Bruen’s bookshelves …

This is a series that will make absolutely zero sense if you haven’t read the previous 14 books. I know plenty of people who’ve bailed out along the way, clutching their heads at the horror in Jack’s brain and in his life. But if you’ve stayed the course, or are brave enough to start the series, it will repay you a million-fold.

It sounds bizarre to say that the book is a pleasure to read, given how dark it is. But it really is. As for the ending … Please excuse me while I scrape my jaw off the floor.