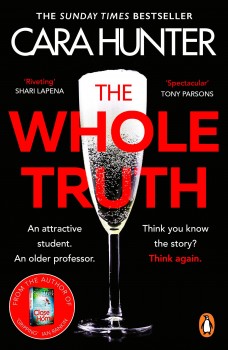 DI Fawley and his wife Alex are expecting a much longed-for child and everything in the garden looks lovely – until the release from prison of a vicious and vengeful rapist and murderer threatens to blight their happiness.

This the fifth of the DI Fawley series set in Oxford. It's a perfect choice for lovers of a traditional whodunit and for those who also like a cast of supporting actors who develop as the series progresses. There's a devious plot with a few red herrings thrown in, all of which fooled me. Her characters are economically but very well drawn and her lead detective, Adam Fawley, has the required troubled background.

He's an adopted child, successful and married to a top-notch lawyer but his life has been shadowed by self-doubt and by the tragic loss of their only son. At this stage of the series his wife, Alex, is pregnant again in her 40s, having almost given up hope of another child. So there should be a happy ending – but that’s not guaranteed.

There are two main storylines in this book both concerned with truth and lies and the grey area in between. One of Fawley's oldest adversaries is released from prison after a 20-year stretch – and he bears a grudge. He's a convicted rapist and murderer and heavily pregnant Alex fears that he is stalking her. But when a woman, known to the Fawleys, is abducted and murdered then all the evidence, astonishingly, points to DI Fawley as the guilty party. Of course none of his team believe that this can be true, but the circumstantial and forensic evidence seems overwhelming, and the powers that be have to go along with the facts.

The second storyline, which is almost as strong, involves a 'his word against hers' scenario. The Oxford college setting is the background to an accusation of sexual misconduct between a beautiful female academic hotshot and a beefy rugby-playing research student who is 20 years her junior. The plot bats to and fro between the two of them, their supporters, the truth and the lies so that eventually my head was spinning. This is a theme that muddies the water and challenges many stereotypes, but all becomes clear at the end.

Cara Hunter has introduced a handy who's who at the beginning of this one with a brief biography of the seven members of the investigative team, which I found very helpful. And she makes good use of different methods of communication to tell her story: text, transcription of interviews, first and third person reports – but not in a gimmicky way and in this case a transcribed podcast plays a vital role in unmasking the truth surrounding the apparent crimes of DI Fawley.

There is a happy ending of sorts and most loose ends are satisfactorily tied up. But I can’t help thinking that there must be some future repercussions from such traumatic events. I didn't want this book to end and now I can’t wait for the next one in the series.