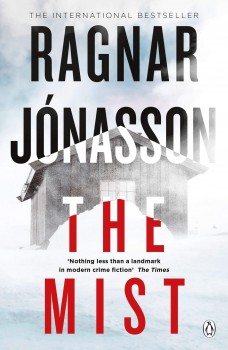 Erla and Einar live in an isolated farmhouse in the eastern part of Iceland. Their daily toil remains unchanged for years until a strange visitor arrives during a snowstorm just before Christmas. As the telephone stops working and electricity dies, the unsettling atmosphere intensifies.

Late December 1987. An isolated farmhouse of Erla and Einar’s in the east of Iceland seems to be disappearing under the layers of relentless snow falling with extra ruthlessness. The cold is becoming unbearable.
Dense darkness envelopes the whole area most of the time as three or four hours of weak daylight bring little respite to the crushing sense of despair and abandonment. The snowstorm makes it practically impossible to venture into the unforgiving elements to have any contact with the inhabitants of the nearest yet distant house or the locals in the village.

When an unexpected guest knocks on the door the shocked couple invite him in. Leó, a man in his 40s, got lost during a shooting trip with two friends from Reykjavik, abandoned his car, and is hungry, freezing and exhausted. Einar welcomes the unfortunate ptarmigan hunter, being the proud and stoic owner of a piece of his beloved land in the barely inhabited part of the country.

Erla, still fighting an urge to flee the emptiness and desolation after decades of being there, feels uneasy. She soon starts questioning the visitor who seems both familiar and dangerous to her. As time moves slowly and nightfall hides all sense and reality, her angst grows, intensified by a sudden telephone failure and customary winter power cut. Even though she is waiting for her adult daughter Anna to join for the Christmas Eve meal, she fears that someone might not survive the night.

February 1988. Detective Inspector Hulda Hermannsdottir is back at work after a horrendous ordeal during Christmas. The yearly joyful occasion to be together with her husband Jón and teenage daughter Dimma, a chance to celebrate together with books, chocolate, warmth and closeness, turned to be anything but. Hulda had to work on Christmas Day, yet again disappointed in her overbearing mother, and frustrated by Jón’s forced cheerfulness and complaints about her long working hours even if he has never refused any networking or business deal.

However, her emotions mostly fought a losing battle between trying to prove herself in a man’s world of the police station and constant worry about the uncommunicative and despondent Dimma. Sadly, her anxiety proved right, and the overwhelming guilt and shame has shaped the rest of her professional and private life.

As Mist is the final instalment in Ragnar Jónasson’s Hidden Iceland trilogy, and the story goes back to the beginning to help with understanding Hulda’s choices, readers will know exactly what had happened from the first book The Darkness.

So Hulda forces herself to focus on an ongoing investigation into the missing gap-year student Unnur and reluctantly agrees to fly to Egilsstadir from where a treacherous road will lead her to what’s been recently discovered at Erla and Einar’s place. Christmas 1987 was truly horrific.

Jónasson gives a masterclass in isolation and claustrophobia in The Mist. Total reliance on land and the forces of nature, along with the harsh reality of living, forces people to make difficult decisions from which they cannot escape. An excellent translation by Victoria Cribb brings a stylish yet foreboding sense of doom, reminiscent of the ancient Icelandic sagas where the fate of each character was predestined.