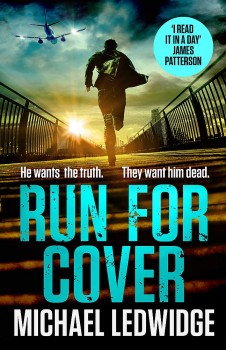 Ex-Navy Seal Michael Gannon insists on helping a friend and former colleague to investigate the murder of his brother by a sniper in a national park.

Ex-Navy Seal Michael Gannon is meant to be keeping his head down. He’s upset some powerful people and as a result has gone to ground on a friend’s ranch in the Utah outback, staying in his ‘bus’ - a large mobile home - playing paintball with his son and even acquiring a puppy.

The rural idyll doesn’t last long. Gannon gets roped into investigating the murder of his friend’s brother by a sniper in a remote national park in Wyoming, during an FBI investigation into the latest victim of a possible serial killer. Two men are killed and the female agent, Kit Hagen, barely escapes alive.

John Barber, ex-Special Forces like Gannon, isn’t prepared to sit around and do nothing. The pair promptly take off for the mountains of Wyoming and end up joining forces with the injured FBI agent, as her own agency seem keen to keep her out of the investigation into the killings that almost claimed her life.

Michael Ledwidge can be relied on to turn out a very serviceable thriller. There’s no secret about who the killer is. He’s named very early on and there are scenes from his point of view, but keeping secrets like that aren’t necessary when an author is able to ramp up and maintain plenty of tension without the need to conceal the identity of the bad guy. And in Run for Cover, not all the bad guys are easy to spot. As ever with books involving former special forces operatives, there’s a stack of military hardware detail that I always enjoy. Here it adds authenticity without information overload.

The odds are stacked against Gannon, Barber and Hagen, and I loved the way the action scenes came over. The characters are competent, no-nonsense and prepared to be ruthless when the occasion demands. Gannon takes a creative approach to problem-solving, often involving big bangs, something I always approve of for the entertainment value (cue the usual comment about willy-waving thrillers from my partner in crime!), and he works well with Kit Hagen when she finds herself going up against the upper echelons of her own agency. They find some unlikely allies – I really liked the very straight station chief who cared more about doing the right thing than he does about his job prospects – and some unexpected enemies.

The plot doesn’t strain credibility and Ledwidge’s blend of action and high-level corruption, shot through with black humour and snappy dialogue, is one that I’ll always be happy to seek out. And I’m happy to report that the Malinois puppy doesn’t get caught up in Gannon’s problems, but I’m going on record now to say that if that changes in a future book, I’ll vote with my feet!