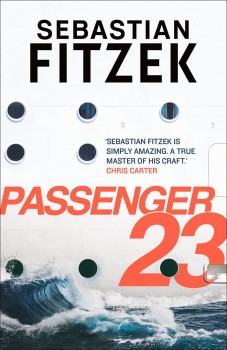 Police psychologist Martin Schwartz lost his wife and son five years ago on a cruise. When someone tells him there was more to their disappearance than a tragic accident, he has to find out more.

I’ve never been on a boat bigger than a cross-channel ferry and the idea of being stuck in a tiny cabin (have you seen how much the bigger ones cost?!) in something that seems like a very glitzy Butlins isn’t my idea of fun. But that doesn’t stop me avidly watching TV shows about the world’s biggest or most luxurious cruise liners and trying to work out the logistics of keeping that many people fed, entertained and healthy.

What the TV shows or the holiday adverts don’t tell you, though, is that on average about 23 people disappear every year on cruise liners, presumed to be unfortunate accidents or suicides – but of course there is always the possibility of more sinister reasons. Any disappearances are almost impossible to investigate, though, as the ships don’t have their own police (although presumably there must be some sort of security arrangements) and with the huge stopping distances involved, turning around to search a vast expanse of ocean for a missing person isn’t going to happen.

Martin Schwartz lost his wife and young son five years ago during a holiday on a cruise ship. The theory was murder-suicide, and that Nadja had thrown Timmy overboard and then jumped to her own death. But in Schwartz’s view, the investigation hadn’t exactly been thorough, and he still doesn’t believe the official version of events. So, when he’s contacted by an elderly woman who claims to have information about their deaths, he drops his work as a police psychologist and books himself onto the Sultan of the Seas, the same ship from which his family disappeared.

Gerlinde Dobkowitz has her own suite on the liner and has lived there for years. Her only hobby appears to be investigating disappearances from ships so that she can write a novel based on her research, and she believes she has uncovered a web of misinformation intended to obscure the fact that Schwartz’s wife and child aren’t the only family pair to have disappeared like that. A mother and daughter went missing several months ago. Naturally, she thinks there’s a serial killer at work on the Sultan of the Seas.

Sebastian Fitzek spins a very complicated, very clever story set in the simultaneously vast but claustrophobic super-liner. The vessel’s billionaire owner is on board, determined to cover up anything that might interfere with his plans to secure a much-needed business deal; the captain, haunted by past events, is ineffectual and entirely under his employer’s control. Neither of them wants a police investigator ploughing his own furrow on their ship.

When a child that recently went missing reappears, refusing to speak, but clutching a teddy bear that Schwartz recognises as one that belonged to his dead son, the plot takes a very unexpected twist and continues to be as opaque as a thick sea mist for most of the journey, with just a few glimpses through the fog to shoals of fish that might – or might not – have been shoals of red herrings.

I enjoyed both the setting and the plot, with its devious twists and wholly unexpected revelations. I usually have to suspend rather a lot of disbelief for many villains and their motivations, but the explanations, when they finally came, were both chilling and convincing, based as they were on people’s ability to take things at face value if it appears to be in their own interests not to ask too many questions. The number of people who fall victim to classic emails scams every year bears witness to that.

Schwartz is a sympathetic protagonist. He’s tenacious, intelligent and ultimately willing to grapple with unwelcome suggestions in his search for the truth of what really happened to his wife and son. Fitzek has delivered an excellent thriller in an unusual setting, with oodles of suspense, a hefty dash of misdirection, and some clever twists. If cruise ship murder mysteries become a sub-genre, I can guarantee that I’ll be as addicted to them as I am to the TV programmes about these (mostly) upmarket gin palaces with their vastly expensive chandeliers and tiny inside cabins in massive contrast to the eye-wateringly expensive suites and cabins with a sea view. For the record, I’m only going on one if I win the lottery and can afford the latter.