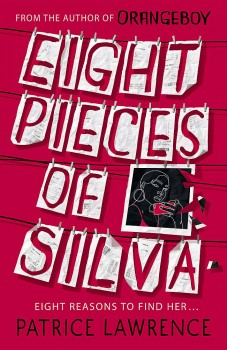 Eighteen-year-old Silva is meant to be looking after her 16-year-old stepsister Becks while their parents are on a belated honeymoon to Japan, but when Silva doesn’t come home, Becks decides to check out her bedroom and then her worries really kick off.

Becks’ mum is about to go on a belated honeymoon to Japan with Silva’s dad. As Silva is 18, she’ll be looking out for her 16-year-old stepsister and Becks is fine with that, just as she was fine with their parents moving in together. She even gave up her own bedroom so that Silva could have the bigger room; after all, it’s not as if Becks needs that much personal space as her stuff ends up spread around the flat anyway, whereas Silva is tidier and more self-contained, keeping to herself much of the time and guarding her domain jealously.

What Becks isn’t expecting is for Silva to immediately disappear, leaving her alone with Azog the cat. When Silva doesn’t come home and fails to answer any of her texts and calls, Becks decides she has no alternative other than to trespass in Silva’s room. When she has to clean up some cat poo Azog the Defiler has left under the bed, Becks finds rather more than she bargains for, all of which adds up to a puzzling mystery that at first brings Becks no nearer to finding her sister even though alarm bells are now ringing very loudly in her head.

Despite getting little support from her best friend, Raych, Becks continues to investigate her stepsister’s disappearance and is drawn inexorably into a part of Silva’s life that she has gone to great lengths to keep hidden. Becks’ quest estranges her from Raych, but she finds a more sympathetic listener in China and even gets help from an extremely unexpected quarter as she delves deeper into Silva’s secret life.

Becks’ story is told in her own words. She’s a smart, sassy, sometimes insecure teenager who has never had to struggle with the problem of coming out to her mum as gay as she’s never been ‘in’. Patrice Lawrence, now established as one of the strongest voices amongst the impressive and diverse community of writers of teen and young adult fiction, quickly establishes her main characters and even though Silva is off stage for much of the book, her presence still looms large in both Becks’ mind and in the series of diary entries written by her that seem to be addressed to her increasingly frantic stepsister. Through the medium of these shorter chapters, the reader receives information that Becks isn’t privy too, but this device does nothing to spoil the sense of mounting concern, anticipation and tension that ramps up steadily throughout the book.

Becks’ sexuality is far from her defining feature and it’s certainly not something she hauls around like excess baggage. Her growing closeness with China is both realistic and touching. The two girls are very much there for each other. Becks and her friends come over as a bunch of authentic teenagers, as sharp as tacks but also sometimes out of their depth and not too proud to grab a lifeline thrown by a passing adult.

Lawrence’s writing is vibrant and leaps off the page, as do her characters. The adults are for the most part sympathetically portrayed and I liked Becks’ mum and her two dads, stepdad Justin and even DNA-dad, Beni, a feckless man whose criminal career ended in jail due to his connection with Becks. Stepdad Justin is immediately likeable, but even Beni grew on me as it became obvious that this time he really did want to stick around and help his daughter.

Silva’s disappearance is the mystery that the book revolves around, but at its heart, Eight Pieces of Silva is a classic coming of age novel with a bright, loyal, likeable protagonist who struck a chord with me right from the start, and not just because of our shared love of The Lord of the Rings!