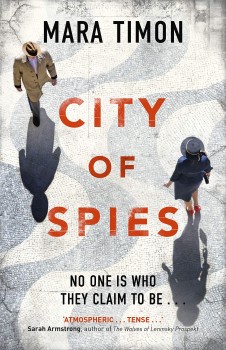 SOE agent Elizabeth de Mornay flees Paris in 1943 for neutral Lisbon, where she finds plenty of enemy intrigue to keep her occupied.

Elizabeth ‘Lisbet’ de Mornay spends most of this book under a succession of aliases to conceal her real identity as a British spy. As it opens, she narrowly escapes capture in 1943 Paris, and makes her way south, joining forces with a downed British airman, Alex, on the way.

The pair form a romantic liaison as well as a formidable fighting force, but when they witness a group of bullies assaulting a young resistance worker, Alex is unable to resist responding, and pays the price. Lisbet is alone when she eventually makes it across Spain to neutral Portugal, devastated about Alex for at least a day or two.

In Lisbon she is provided with funds and a fully-furnished house by Matthew, a relative in the diplomatic service, who enlists her to gather information about German activities. The city is a hothouse of gossip, and Lisbet’s facility with languages means she is able to infiltrate social groups to gather information about activities likely to be of concern to the British. Salazar is thought to be sympathetic to axis interests, and both the Gestapo and the Abwehr are active.

Lisbet keeps her ear to the ground and investigates whispers by following suspicious persons and visiting places of interest, identifying places from where rare metal ores are being shipped and from where details of British shipping are being transmitted to German military. Her activities have not gone unnoticed, however, and as a result more than one attempt is made on her life.

Despite her loathing for Nazis, she feels an immediate attraction to Eduard Graf, a major in the Abwehr. The feeling is mutual, and despite the reservations both have for the political allegiances of the other they eventually become very close.

I regret to say that I found the story as a whole more than a little unconvincing. The flight south seems altogether too easy, even given the protagonist’s skill with arms (and unarmed), multiple language facility, great beauty ... The aviator Alex turns out to be skilled with a knife, too.

On arrival at Lisbon she is presented with a house already equipped with a wardrobe full of Paris fashions plus all the accessories needed to flaunt herself about town, and plenty of cash to rent a secret bolt-hole, hire taxis and eat at the best restaurants. There is a vague reference to the starving masses and food shortages outside her own little bubble, but the narrative stays entirely with the well-heeled elite.

Despite the references to the Gestapo and their basement activities, and the occasional bullets flying in her direction, it becomes difficult to believe Lisbet is ever in real danger. The book is a bit reminiscent of Modesty Blaise, for those old enough to recall her.