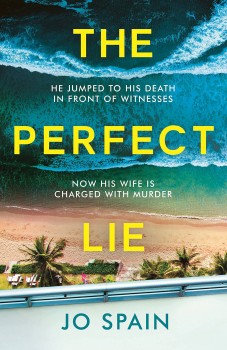 Detective Danny Ryan jumps to his death rather than face arrest by his own colleagues. Less than two years later, his wife Erin is put on trial for her husband’s murder.

When you pick up a standalone Jo Spain novel, you know you are going to be misled from start to finish. While the Tom Reynolds police procedurals which made here name stuck more or less to the conventions of the genre, her work since has been brilliantly twisted, setting the reader a series of apparently unsolvable problems in a labyrinth of blind alleys and false assumptions.

This latest effort – and possibly her best to date – is a perfect example. Irish immigrant Erin Kennedy who left her home after a family tragedy, now seems to have it all. She is successful in her job with a New York publishing firm and blissfully happy in her home in Newport, Rhode Island, the playground of the East Coast’s ‘old money’ families. Her two-year marriage to homicide detective Danny Ryan – despite his very Irish name he is black – is a happy one, although as the story opens he is apparently under pressure at work.

One morning, she answers the doorbell to their apartment to find a stern-faced Ben, Danny’s long-time friend and work partner, and two uniformed colleagues. Within seconds Danny, freshly showered and shaved for the day’s shift, has walked to the balcony of their fourth floor flat and thrown himself to his death.

What follows is Spain’s clever version of the classic ‘locked room’ mystery. Three distinct timelines, one an apparently unconnected sub-plot involving a girl student at Harvard, lead into a maze of blind alleys leaving Erin, and the reader, to form their own, usually incorrect, assumptions.

First Erin learns that Danny was the subject of an internal inquiry and about to be arrested for corruption. Then she uncovers secret bank accounts containing hundreds of thousands of dollars.
The local police force, who Danny had always taught her were a genuine ‘family’, always protecting their own, cut her off completely. Erin is not even allowed to ID her husband’s body, and he is cremated in a closed casket suggesting that something strange is going on that the force wants as little to do with as possible.

These split narratives – Erin on the morning of Danny’s death and the weeks following; the retrospective account of a young woman called Ally, a Harvard proctor; and Erin, more than a year later, in custody and being tried for her husband’s murder – are not for the inattentive and some may find it necessary to check back to know exactly what is going on as narrative one and three seem incompatible. Eventually, the link between all three is revealed.
Spain’s characterisation carries the story. Erin, at first inconsolable following the shock of Danny’s suicide and totally alone, begins to ask herself how she did not see it coming and in what ways she could have been partly to blame.

As those she can trust are all in Ireland, with her parents unwilling to fly, she nevertheless sets out to find the truth of what her not-so-innocent husband was hiding. Cal Hawley, the son of a hugely wealthy local family who has connections with a case Danny was involved in before his death, and Karla Delgado, a feisty lawyer, both have major roles to play in her investigation.

This compulsive, captivating and deviously twisty thriller is another masterpiece from a woman bidding hard to be rated as Ireland’s finest contemporary writer. What makes this story scintillating is her ability at keeping secrets until innately knowing when and what to reveal.

Her protagonists are well drawn with some intriguing personalities, although some are rather unpleasant. Erin herself is flawed by events of the past and her and the reader’s perceptions of Danny are constantly challenged through her discoveries and fluctuating emotional reactions. Beneath the surface, there are deeper considerations of family and distance, truth, friendship, inherited wealth, perceptions of women and even the political situation in the USA.

But if you are a reader with a neat and tidy sense of justice, you won’t find closure in this precisely plotted and deft, all-too-plausible story, which perhaps fails to answer every question it raises, but nevertheless is an entirely gripping and addictive read.