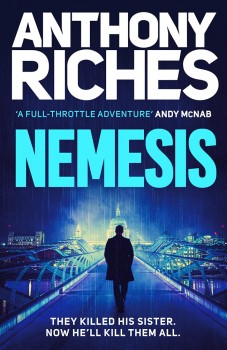 Metropolitan police close protection officer Mickey Bale is out for revenge on the gang boss ultimately responsible for his sister’s death from a drug overdose.

Mickey Bale is a man on a mission, and the mission is to take down Joe Castagna, the gang boss ultimately responsible for his sister’s death. And along the way, he’s going to create as much mayhem as possible, aided by an unknown benefactor who communicates with him only by WhatsApp messages, passing insider information to Mickey about the crime lord and his extensive operation. Naturally, this source goes by the name of Nemesis. After reading Tom Marcus’s life-in-MI5 books, I’d been hoping for something a little less cliched, like Purple Puppy, maybe, but alas, all I got was a ‘cool’ code name destined to double as the title.

When he’s not on a very effective vigilante mission, Mickey is a respected close protection officer in the Metropolitan police, currently assigned to the detail babysitting the Minister of Defence, Sir Patrick Sutherland, who’s teetering on the brink of a slippery slide into a messy and high-profile fall from grace due to questionable past dealings with the Chinese government. Press scrutiny is mounting inexorably, leading to a series of uncomfortable meetings with the PM that certainly do nothing to improve the minister’s temper.

Mickey is playing with fire where his extra-curricular activities with Castagna is concerned. The man is well protected and extremely ruthless, surrounded by hard men like Eddie who are prepared to carry out his every order even if they don’t always like what they have to do. Eddie is close to Joe and knows that to stay alive, he must toe the line.

Despite his unfortunate line of work, I ended up with a sneaking liking for Eddie. He was the only one of Castagna’s mob who seemed to have any redeeming features at all. Other than hoping Eddie made it through to the end credits, it was easy to suspend my own morals and root for Mickey in his dangerous quest for vengeance.

Nemesis is the prolific Anthony Riches’ first move away from historical thrillers into a contemporary setting. Mickey Bale is an excellent protagonist – a man whose job relies on his ability to blend into the background, toe whatever line he’s told to follow, and do whatever it takes to keep his principal safe.

His job brings him into conflict with his wife at times as arrangements get cancelled without notice, and she certainly doesn’t like finding out that he’s put his own life on the line – again. Even the most understanding of partners can reach the end of their tether and even from early on, I got the impression that Mickey may be on borrowed time.

Despite liking the premise and the characters, Riches almost lost me on several occasions in the first half of the book, when his staccato sentences, often lacking in verbs and with pronouns only occasional visitors, started to grate on me and I ended up longing for nice, normal, joined up sentences, trying ever harder not to yell: ‘The humble comma is your friend, not a mortal enemy!’ But when my tolerance was getting stretched to breaking point, more characters that I liked would wander onto the page, like the suave, intelligent army major, James Cavendish, assigned to the errant politician as a private assistant, when actually everyone knows he’s there to keep an eye on the man and report back to the PM.

And then by the time my head was reeling from the short, sharp jabs in every paragraph with all-too frequent full stops and lack of any natural flow, the story really took off, with Sutherland sent on a diplomatic mission to Belize that would bring him into conflict with his Chinese connections.

A very deniable bunch of what are now euphemistically termed private military contractors suddenly ramped up the action to a new level and let Riches show what he’s capable of when it comes to writing immersive and effective action scenes. From that point onwards, I was hooked and even started to accept his writing style, even though I never actually managed to warm to it.

Naturally, things go badly wrong for Mickey where Joe Castagna is concerned when he makes a fundamental error by involving the press, thereby creating a very weak link. Castagna is also busy exploiting Mickey’s other Achilles’ heel, his arms dealer friend, who rents out a variety of weapons in a business conducted in the deeper regions of the dark web.

The story builds to an impressive and entertaining set piece when Mickey enlists some effective – and expensive – outside help and goes full-on Rambo in a direct assault against Castagna and his goons. The political machinations within government and the Met are as interesting as the action, though, and Riches handles both strands of the storyline deftly.

Yes, it’s predictable in places, but I was willing to grant a free pass in return for a tense thriller that was able to grab my attention and keep me reading, despite my stylistic reservations.