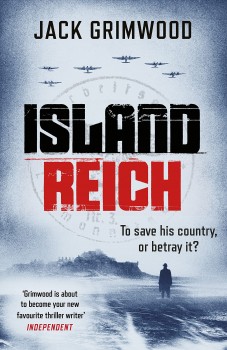 With the Nazis victorious in France, Hitler is preparing for the invasion of Britain from the Channel Islands with the Duke of Windsor at his side. Agents from Britain and from the USA are working to prevent it.

This thriller is set in 1940, at a time when the future of Europe hung in the balance. Hitler has plans for the invasion of Britain and hopes to smooth his path by having the Duke of Windsor to reconcile those opposed. Half of the book relates the movements of the Duke and Duchess through France into Spain and Portugal, where agents of both the Third Reich and the Western powers are in close touch and seeking to gain their cooperation.

If successful in this, Nazi plans are for an invasion of UK from Alderney with the Duke of Windsor to be made puppet head of a new regime. To encourage enthusiasm for this role, the Nazis play on his resentment of George VI and his wife, and have a file of compromising pictures and documents in reserve. The secret services of the UK and USA have both fielded agents to prevent these plans ever coming to fruition.

The British are fielding Bill O’Hagen, a safecracker and thief, to take the place of a pro-Nazi man on Alderney. He is landed by submarine with instructions to steal the compromising material and return it to London. On arrival, however, he is surprised to find a woman claiming to be his wife, although she is really an American agent, Daisy Renhou. Daisy is accompanied by Mignon, a young Jewish girl who she has rescued from the chaos in France.

The story proceeds by way of interleaved episodes, those featuring the Nazi seduction of the Windsors alternating with the progress of Bill and Daisy in Alderney. The few genuine Channel Islanders left on the island are hostile to Bill, who they identify with the Nazi forces. It is some time before Bill and Daisy come to trust each other, which also causes complications. Whether Bill can complete his task and also save Daisy and Mignon looks uncertain.

Many of the characters are real people, particularly the Windsors of course. The latter are represented as being shallow and self-serving, and it is difficult to care much about their concerns. Since the outcome in real life is known, the risks represented by the Windsors, which may have appeared threatening at the time, now seems merely a footnote in history, and unimportant notwithstanding that top-level Nazis took a substantial interest in the matter.

Events on Alderney are more exciting, with a variety of characters on opposing sides and risks for the two main protagonists. Bill shows much more character than one is led to expect from his background, although he is not altogether convincing – he and Daisy fall in love a bit too quickly for my liking. Overall, I found the book only moderately thrilling.