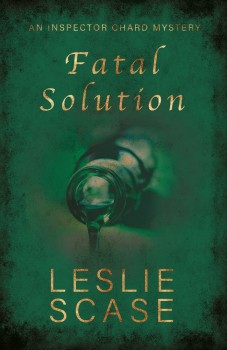 Inspector Thomas Chard puts his own life at risk as he attempts to solve two apparently unrelated in a bustling South Wales valleys town.

English university-educated Inspector Thomas Chard, number two in the local police force, has enough problems already in the busy South Wales valleys town of Pontypridd. For a start, there’s the language. In late Victorian times, despite rapid advances made possible by coal and industrialisation, as much Welsh is spoken as English and life continues much as it always has done.

But beneath the busy exterior, there is an undercurrent of bad feeling and some very real hatred, sparked by a dreadful pit disaster, largely caused by the mine owners’ greed and conveniently covered up by an inquiry which failed to apportion blame where it was due. Then there’s the small local force itself. With a Superintendent who believes senior officers are there to supervise rather than investigate and that rank must be strictly observed at all times, and rivalries and jealousies between the constables, detective work is never easy.

When Chard is confronted by a man’s unexplained death in a fire, the case appears unremarkable, even if the cause isn’t immediately obvious. But following new evidence, Chard suspects murder.

A second murder by poisoning with another man left hovering between life and death, a vicious sexual predator, industrial espionage and the ill-feeling generated by the loss of so many local men in the pit explosion all complicate the investigation, putting Chard’s own life at risk.

The appeal of this complicated story – Scase is a strong advocate of the so-called ‘classic’ murder mystery genre – is not all in the detection. Scase’s brilliant research brings the Pontypridd of the era vividly to life, and many of the events described actually took place – including the dreadful Albion pit disaster and the rugby match against traditional rivals Neath, in those days never a pretty sport, which had to be abandoned when the crowd began to fight among themselves!

This attention to local detail brings the story to a vibrant life and drives along the complicated plot as Chard navigates his way through a lengthening list of suspects, a chaotic personal life, clues and red herrings, towards the poisoner, on the way dealing with some nasty industrial espionage between rival railway companies and trying to expose a sexual predator whose perversions have led to the death of a prostitute. All of these should leave the reader enthralled and guessing what part these events play until the final page.