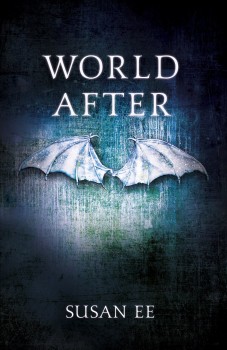 The angels are in control of the world, with scattered groups of human resistance doing their best to fight back. Against the backdrop of a ruined world, Penryn is searching for her sister again.

World After picks up immediately after the climactic events at the end of Angelfall, Susan Ee’s brutal and fascinating story of the earth’s apocalypse at the hands – or rather wings – of a legion of destroying angels.

Raffe, the angel who had been 17-year-old Penryn’s companion in her search for her sister, Paige, thinks Penryn is dead and has handed her body back to her people. Gradually, the effects of the venom that Penryn had been injected with wears off, but by then it’s too late. Raffe has gone and Penryn is left amongst the resistance fighters who have just hit back against the angels' main aerie, causing chaos and destruction.

This is no fairytale, even though Penryn has been reunited with her sister. Paige was subjected to horrific experiments while she was held captive by the angels and is regarded by everyone except Penryn and her mother as a monster, but it’s hard even for Penryn to see past her razor-sharp teeth and badly stitched together body.

When Penryn’s sister is attacked by people in the resistance camp, it ends badly, with numerous people dead and Paige missing again. Penryn is as determined to find her sister now as she was before, despite – or maybe even because of – what’s been done to her. Her search takes her back amongst the angels, to the heart of Archangel Uriel’s plans and plotting, and eventually reunites her with Raffe.

Angelfall was always going to be hard act to follow, but World After very much rises to the challenge. The intrigue and tension amongst the angels provides some tantalising insights into their society. Uriel wants the top job, that of the Messenger, but Raffe still has supporters amongst the warriors, so the way forward isn’t quite as clear cut as Uriel would like.

Raffe is believed by many to have joined the ranks of the Fallen, rejected by his own sword when he was given the demon Beliel’s black bat wings in place of his beautiful snowy-white feathers. Raffe wants his own wings back, but to get them, he’ll have to take them off Beliel, and for that he’ll have to catch up with him first, and then cut them off him, the same way Raffe’s wings were cut off him by the demon.

Fans of Raffe will no doubt be disappointed that we don’t see as much of him in this book but, as a consolation prize, we do get to see some scenes from his point of view. When he does appear, the archangel – a self-confessed agnostic (on the grounds that he’s never actually spoken directly to God) – is on good form, but he and Penryn aren’t much closer to admitting their feelings for each other. Raffe still carries the baggage of the dreadful punishments he had to inflict on his own followers, two millennia ago, when they dared to get too close to the Daughters of Men. All in all, it’s not much of a recipe for a successful romance, but then this isn’t a romantic sort of book.

World After is intriguing, dark and never pulls its punches. The raw desperation of the survivors of the apocalypse makes painful reading. There’s little hope, and even less goodness, in the world, but there are strong characters, sharp dialogue and great action. And if the series doesn’t end happily, I’ll be sending in a bill for the therapy I’m going to need. Young adult thrillers really don’t get much better than this.