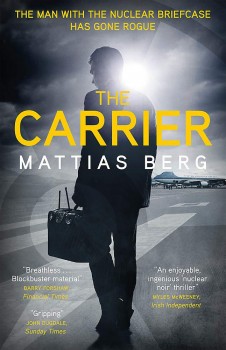 After years of leading a double life as an academic and a member of an elite security team, Erasmus Levine decides to flee. The problem is that he does it during the presidential visit to Sweden and while he is physically attached to a nuclear briefcase. Soon he becomes the world’s most wanted man.

Erasmus Levine leads a double life but only a small group of people are aware of the fact. He’s an assistant professor at the School of Philosophy at the obscure Catholic University of America, married with two children and leads a seemingly ordinary existence. Apart, of course, from the interesting time-consuming research that might appear very boring to his friends. He also was selected for the world’s most important assignment to travel with the American President and be in charge of the nuclear briefcase, which is both a blessing and a curse. He’s been chosen for his intellect and passion, and trained and shaped to become a member of an exclusive team.
For years he has been receiving a series of cryptic messages which started with the words ‘We two against the world’ from the mysterious Alpha. As the time passed, the ingenuity of coded ways to deliver snippets of information convinced him that at some point he would need to escape from his overwhelming responsibilities. He sees his chance during an unexpected official visit to Stockholm.
Security is tight as always, with vigilance at the highest level yet as the early morning fire alarm sounds in the Grand Hotel, he decides to flee. The President and his entourage take refuge in the never-ending tunnels under the city. Erasmus manages to confuse those around him by using the nurse who had kept an eye on him as a human battering ram. He vanishes, together with the injured nurse and the attached briefcase.
What happens next is completely unpredictable. He realises who Alpha is. He gains an unexpected ally, his former tutor and academic supervisor, the enigmatic brilliant Ingrid who wants him to help her to eliminate the world’s nuclear arsenals. But the controlled demolition might end either nuclear assets or wipe out humanity. There is no way to get a clear answer either way and everyone knows it. Hence Erasmus becomes the most wanted fugitive, hunted by the US military and his former handler, Edelweiss, who will stop at nothing to catch him.
The intricate plot of Mattias Berg’s The Carrier, excellently translated by George Goulding, deals with many existentialist issues, questioning all that we know about nuclear programmes, the involvement of various countries in building weapons of mass and rapid destruction, and the moral dilemmas of those in the various systems. Mankind followed its most dangerous fantasy and created pure danger.
As Erasmus’ dissertation focused on the hidden layers of knowledge relating to the development of nuclear programmes, we get to know his thought processes, but some issues are rather too difficult to comprehend. This layer of scientific and political complexity adds tension to the already full-on suspenseful narration as Erasmus is not sure who to trust and what he actually believes. Conflicting thoughts and the overwhelming stress and pressure of being on the run impact him heavily.
The network of deep tunnels, many of them blasted out and carved especially for now defunct nuclear weapons programme, shows a different story to the neutral Sweden people usually think of. but it can also represent the labyrinthine methods of governments working, true or not, with brainwashing, intelligence, action and terror. Berg brings all these ideas together to make you think.