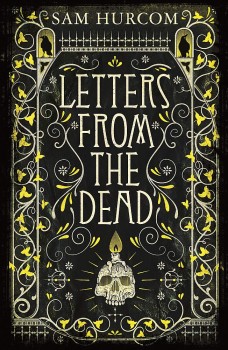 Letters from the Dead

Photographer Thomas Bexley has become a drunken recluse, haunted by visions of the dead after a dreadful case in Wales. When news of a spate of kidnappings, for which his friend and mentor is the major suspect, rouses his interest, Bexley soon finds himself accused of a string of murders.

Early forensic photographer and co-opted Scotland Yard civilian investigator Thomas Bexley has become a drunken recluse after his narrow escape at the hands of a maniac in his earlier dreadful case in the isolated Glamorganshire village of Dinas Powys.

The fevers, headaches and hallucinations that affected him then, and which made him an increasingly unreliable investigator and narrator, have never left him. Now, a year later and constantly haunted by terrible visions of the dead, he has sought refuge in the bottle, going through life in a permanent drunken stupor, considering suicide, scarcely even knowing what day it is as he attempts to keep his living nightmares at bay.

News of a series of extraordinary kidnappings reaches him from a former friend and colleague in the Forensic Crimes Directorate. Men and women of all classes have been disappearing, apparently at random, from all parts of London, believed kidnapped and possibly murdered by an unknown criminal dubbed by the press the London Wraith who leaves only an apparently occult symbol at the scene of each crime.

Summoned by the Commissioner and other top officers at Scotland Yard, Bexley is shocked to learn that his friend and former mentor in the Directorate, Professor Elijah Hawthorn, is the lead suspect after his bloody thumbprint was found at the scene of the latest abduction.

Returning to his East End home, Bexley unearths a months-old letter from Hawthorn amid a pile of unopened mail. In it the man who for a period he regarded as a father figure, pleads for his help, claiming to have unearthed a gruesome conspiracy at the very heart of the Metropolitan Police, also involving members of the aristocracy and parliamentarians.

Bexley embarks on a journey to Hawthorn’s last known address – a remote village in the in the Scottish Highlands where he has been hiding – in the hope of helping to prove his innocence. He is aided by a young woman who claims to be the sister of one of the kidnapped women, but despite an attraction to her, he cannot shake a suspicion that something is not right.

But wherever Bexley goes, he is followed by the dead. As the mystery deepens, so too does his grasp on his own sanity. Arrested by the Met, apparently on unshakeable evidence that he is the Wraith, he becomes increasingly uncertain of any kind of truth.  And doesn’t know how he can trust anybody around him, when his condition will not even allow him to trust himself.

This is top notch historical crime fiction, with a good deal more than a dash of the supernatural. Like the best of Poe, it’s melodramatic – at times perhaps a shade too much so. Equally at times it’s plain bloody stomach-churningly frightening! But the descriptions of alcoholism and the effects of mental illness are among the most graphic and realistic I have ever read and not only set the tone but dominate the whole story.

Hurcom, a former short-story writer, children’s author and illustrator, writes with fluency and power to attract even hardened readers of supernatural fiction. Letters from the Dead is creepy, disturbing, eerie, dark, spine-chilling and macabre in every way that a Gothic thriller should be. I predict it will make most readers uneasy – but like me, they won’t want to put it down until they have discovered the clever final series of twists – which even then leave an area of doubt.