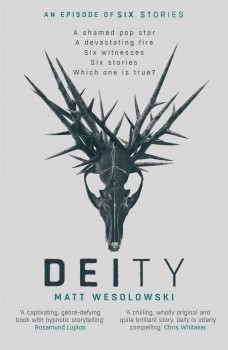 A celebrated but secretive pop star dies in mysterious circumstances; some acclaim him a gentle genius, others see him as a predatory paedophile.

This unusual book has at its centre pop megastar Zach Crystal, who provided the soundtrack for a generation but shunned interviews and shut himself away in a Scottish forest. After disappearing for a year, he returns with a publicity blitz to launch a new album but is then immolated in a fire that destroys his home.

His music appeals to all ages, and he has strong supporters who use the media to attack any detractors. But there is also a growing swell of criticism from young women who claim to have been Crystal’s victims. To shed light on this apparently irreconcilable divergence in views, podcaster Scott King finds six witnesses who offer their own particular perspectives on Crystal.

The book is made up of these interviews, with King’s questions and observations in italics, interrupted by sections of the one and only live TV interview session given by Crystal on his brief return to the limelight, interspersed with occasional blogs and broadcasts. The narrative is not therefore linear and is blown up with the sort of froth typical of media topics. It is only King’s observations that gradually pull things back on track.

The interviews begin with a paedophile hunter who claims to have caught Crystal grooming a young girl only to have Crystal’s security staff steal the evidence and take heavy-handed legal action. This is followed by a young woman who asserts that Crystal supported her as a damaged teenager, and now scours the media for reports hostile to her hero so that she can pour scorn on them. Initially the interviews are notable for invective rather than light, but as King finds witnesses unexpectedly close to Crystal a more stable picture eventually emerges.

While Crystal is of course fictional, elements of Michael Jackson and Jimmy Savile come very much to mind, and the story does tend to evoke musings on the nature of fame, both from the standpoint of those who have it and on the nature of the attraction for the rest of us. The use of media posts and the exchange of confrontational views makes the format very modern.

For the first half of the book the lack of progress in getting to facts made me wonder whether the exercise would ever produce results; conversely, I ended up surprised at the people who came forward for interview and the extent of the truths revealed. In fact, I ended up wondering whether it might have felt more realistic if some of the mysteries of Crystal’s life had remained obscure. But the whole thing was very well done. I was reminded of the fashion in the 18th century for novels in the form of letters.