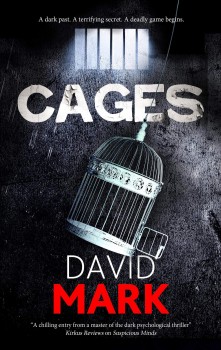 A single mother on the run, escaping her traumatic past with her son, has found a place as a guard in one of Britain’s northern prisons, where she seems settled at last. But all this is turned on its head by a highly intelligent villain with escape on his mind.

For anyone who loves total immersion in a tale that is compelling, unnerving, character driven, humorous, dark and just a little weird – David Mark is the author for you. If you like a bit of otherworldliness, then his McAvoy police series is a must.

In Cages, the central character is a writer – a device touched on before in Mark’s work - shambolic, empathetic, hopeless and endearing. Through him we gain access to a sharp brain and cracking dialogue, often very funny, and to one of the most entertaining scenes in the book – a creative writing course in a bleak north-eastern prison. The novel is largely about back-stories and how they create and shape current lives and how they curl and interlock with others.

The story revolves around a single mother, on the run with her son from her past and the terrible trauma that has shaped it. In the beginning, she feels ‘safer in a cage than adrift among the wolves’, but the cage was too awful a place to remain, whilst the past itself is still only one step behind. Now Annabeth has found a place as a guard in one of Britain’s prisons, and is proving to be capable and appreciated.

Into this space encroaches Cox, a highly intelligent villain with escape on his mind – and the only way to achieve it is through bribery. His past has links to Annabeth – not in a good way of course. Although terrified, she knows she can’t avoid him any more. Cox, knows he has to get away because he feels something that lies deep in his past might shortly be revealed. He manipulates his way onto a writing course, given by the author whose talent is greater than his popularity, flattered into accepting the offer of strutting his stuff on the prison stage. From there the fragile peace of the classroom goes pear-shaped and violence erupts.

The clues are there, cleverly disguised, for those sharp-eyed enough to see them. Mark is brilliant at blind-siding the reader in the most entertaining of ways.

Don’t for one moment think this is a clean papercut of a crime story. There is blood, gore, terrible harm and decay. One of Mark’s talents, though, is to move the reader on past this, distracting them with intelligence and humour. The writer character is the perfect foil for the grimness, lifting the pace and direction away from the dark corners in his innocence and unwitting keenness to help – and obsession with words and language. David Mark is a born storyteller and his audience is growing, but still should be much wider. Cages another triumph for him.