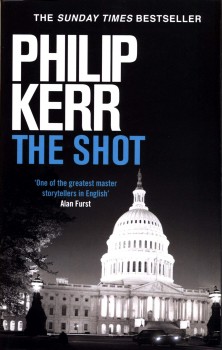 After a year in office, Fidel Castro was sufficiently unpopular for elements of the US Government and the mob to arrange an assassination. However, these things don’t always go according to plan.

Since Philip Kerr’s death in 2018, his publishers have re-issued some of his earlier books which might appeal to readers who enjoyed the best-selling Bernie Gunther series. The Shot, first published in 1999, is a standalone novel which incorporates a great deal of fact, and as usual with Kerr the truth is blended with fiction in a way that is both informative as well as entertaining.

In 1960, America was in the grip of paranoia about Communists, and the Cuban revolution was generating plenty of anxiety. Fidel Castro was hated both by the mafia, who had been pushed out of their lucrative activities in Cuba, and by the US Government, who feared Cuban links with the USSR. A natural partnership therefore existed which led to limited forms of joint action, although this naturally had to be concealed from the public.

The central figure in the book is Tom Jefferson, a professional assassin. He’s introduced in some detail, a serious man who is skilled in his work. When not working he lives quietly with his wife Mary, who works in the campaign for the election of JF Kennedy as US president. Jefferson is approached by mob and CIA figures to hit Castro; his research and planning is well advanced when he gets word that his wife has committed suicide, and everything changes.

Jefferson’s disappearance from sight is very frustrating to Sam Giancana, the mob boss in charge of organising the hit, and he recruits Jimmy Nimmo, an ex-FBI man, to track him down. Nimmo is painstaking and despite a dearth of evidence eventually obtains enough to get close. By this time, Jefferson has another target in his sights, but there are a few dramatic surprises before matters are resolved.

The book covers much of the background explored in the numerous accounts of the assassination of JFK: the alleged relationship between Joe Kennedy and the mob, and the links between certain US Government agencies and the mafia in particular. With the more involved plotting, it would be difficult to say without detailed research how much is fact, how much surmise and how much complete fiction.

There can be little doubt, however, that Philip Kerr’s picture of the time is brilliantly brought to life by the amount of minute detail he uses to substantiate the narrative. Popular music, fashions, sports events and enthusiasms, bowling alleys, slang, even the use of LSD; in all areas of life Kerr packs in information.

As usual with Kerr, this convincing background is intertwined with a gripping story line, clever, cynical and incorporating several twists and turns which require the reader to completely revise their expectations. Despite its length, the book commands complete attention until the final page.