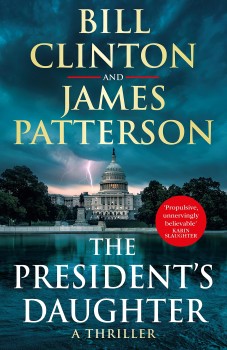 US President Matthew Keating isn’t afraid of taking hard decisions, but when the consequences of those decisions threaten his family, it gets very personal indeed.

Former Navy SEAL Matthew Keating, now President of the United States, takes the decision to send a team into Libya after terrorist Asim Al-Asheed, knowing it will be a career-defining moment. When the intended strike goes wrong, killing members of Al-Asheed’s family and failing in their main objective, Keating doesn’t shy away from the consequences of his actions and promptly takes responsibility and issues an apology.

Ironically, it’s the apology that subsequently wrecks his career, not the failed military action. He made the fundamental error – in some people’s eyes - of appearing weak on the world stage, and that allowed his own vice-president, Pamela Barnes, to challenge him for the top job and become the first woman president of the US, something that remained tantalisingly out of reach for Hillary Rodham Clinton, wife of one of the authors.

Keating isn’t too concerned about stepping out of the limelight, nor is his wife Samantha, who’s happy to return to her archaeological work, or his daughter Mel, who never liked the unflattering spotlight thrown on her by her father’s detractors, who were happy to use a teenage girl as a pawn in political games played out in the press and on TV.

When Mel disappears on a mountain hike and her boyfriend is found murdered, Keating vows to get his daughter back by any means necessary, even if it means going off the grid and doing the job himself.

Bill Clinton has teamed up again with veteran thriller writer James Patterson to continue the adventures of the charismatic and gung-ho Keating in a fast-paced romp through the corridors of power in the White House and the barren mountains of Libya, both very hostile environments where Keating is concerned.

Barnes, his former vice-president, is more concerned with the image she projects to the voters than she is about Keating’s kidnapped daughter. Relying heavily on the advice of her husband, one of her top aides, she’s reluctant to commit to any sort of decisive action, and comes over as both vacillating and self-serving, in contrast to her predecessor, who doesn’t suffer fools – or politicians – gladly and isn’t prepared to sit around waiting for something to happen. Keating isn’t afraid to call in favours at all levels and use his name to open doors that might otherwise have remained closed.

Clinton’s years in the White House lend the weight of authenticity to all the details about the protection afforded to serving and former presidents, and I was surprised to learn that the children of former presidents cease to be entitled to protection when they reach the age of 18. Despite the obvious and appealing strength of Keating as a protagonist, the female characters stood out the most for me. Mel Keating is no one’s victim waiting passively for rescue by a bunch of brawny blokes. She’s intelligent, tough and very, very resourceful. And so is her mother. In a crucial scene, it’s Samantha Keating who delivers an unexpected body blow to Barnes and her procrastination.

I could have done without the wholly predictable heroic death of one of the characters in the climactic assault on the stronghold of Mel’s captors, but that’s just my preference for subverting some of the genre’s standard and rather over-worked tropes, and that’s really my only criticism of a book that I devoured almost in one sitting (not bad for well in excess of 500 pages). This is a dramatic, very entertaining thriller from two big names who’ve combined to excellent effect to produce a political thriller where the female characters rightly nab as much of the limelight as the men.