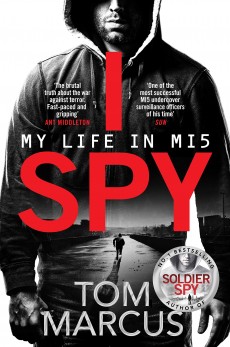 Former soldier and intelligence officer Tom Marcus tells the inside story of his time in an MI5 surveillance team.

During his time as a surveillance officer for MI5, former solder Tom Marcus was involved in foiling numerous terror attacks on British soil, but his work took an increasing toll on his mental and physical health, leading to his eventual retirement from the security services with serious post-traumatic stress disorder.

This follow-up to Marcus’ first book, Soldier Spy, delves deep into the shadowy world of British intelligence and the men and women on the front line, constantly alert to threats to both national security and the peaceful existence that we all hope to lead. From the beginning, it’s clear just how much Marcus has been affected by his work and he pulls no punches when talking about his PTSD, often manifesting as horrendous nightmares where he fails in his job and people suffer and, even more dangerous, his panic attacks while he’s actually on the job. For most of us, that would be pretty dire in any circumstances, but for Marcus, it was life-threatening, putting not just his own safety on the line, but also that of the team he cares about so deeply and the public he’s sworn to protect.

The first set piece Marcus delivers is a surveillance operation deep in the lonely Welsh mountains, believed to be the site of a terrorist training ground, something more usually associated with the badlands of the Middle East rather the heart of the UK countryside. Marcus’s job was to pose as a bird watcher and report back to his colleagues on the activities of GREEN ATLANTIC, BLUE TONGA and their companions. The randomly generated code names of the men and women who’ve come to MI5’s attention are always capitalised, for a reason not explained. The information Marcus is able to gain from this is enough to enable the operations officer in Thames House, MI5’s London headquarters, to order Executive Action – the authority given to firearms units to carry out what’s known in the trade as a ‘hard stop’ where the police use armed force to arrest the suspects.

The action scenes are always tense and wholly believable, peppered with rapid-fire radio communications and instant but carefully calculated decisions that mean the success or failure of an operation. For all our sakes, it’s lucky that they mostly get things right. Even when all that’s being described is a simple – if anything is ever simple in the world of the security services – operation to follow a suspect, the details Marcus lays bare are constantly fascinating, from the sheer number of people needed on foot and in vehicles to follow just one person to the tradecraft of how to change your appearance with the minimum effort for maximum effect.

I was completely hooked from the start and Marcus’ grip didn’t lessen throughout the wholly fascinating story of his life as a spy, both at work and off duty. The code names were an unexpected bonus and did leave me wondering how anyone could refer to a terror suspect as MAGENTA STOAT while keeping a straight face, but I suppose the threat of violent death can have a suppressing effect on even the most macabre sense of humour. The combination of animal names and colours was a particular favourite of mine, and I was constantly hoping for PURPLE RACCOON to make an appearance.

For anyone who enjoyed Spooks or any realistic police or spy drama, I Spy falls firmly into the must-read category. There are plenty of books about spycraft, with even former MI5 head Stella Rimington turning to fiction writing, but it’s rare to read a boots on the ground factual account like this from the less glamorous end of a difficult, dangerous job. I was as caught up in this as I have been in any decently written thriller, and Marcus brings the sharp edge of utter authenticity to his story that only an insider can achieve.