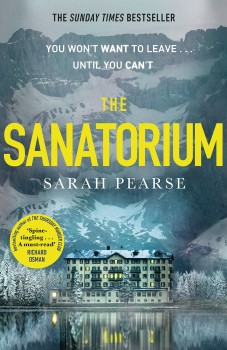 An isolated hotel in the remote Swiss Alps, which was once a sanatorium, is cut off by an avalanche. A deranged masked predator stalks the residents and the only person who can help them is convalescing fellow guest, Detective Elin Warner.

This is an enjoyable first novel in the fairly unusual setting of the Swiss Alps, where British author Sarah Pearse lived for some time. The sanatorium of the title, where TB sufferers were treated, is long gone and the imposing building has been turned into a state-of-the-art ski resort hotel. But the sanatorium and its disturbing secrets cast a long shadow – a shadow made into human shape by a creepy figure in a rubber mask who starts bumping off the staff and residents in a suitably gruesome manner.

Enter our heroine, Elin Warner with boyfriend Will in tow. We first meet them on the funicular railway making its almost perpendicular way up to their isolated destination. A blizzard is looming and Erin already has plenty of issues of her own to deal with. She’s on extended leave from her job as a detective and is reluctantly joining her estranged brother Isaac for his engagement party to Laure. It’s being held at the newly opened hotel where Laure is on the staff. Then two events force Elin to abandon her role as guest and, with no enthusiasm at all, assume the role of detective.

First, Laure goes missing and is assumed to be a victim of the masked predator - and it soon become apparent that she's not the first. Then the storm worsens, and an avalanche cuts the hotel off from the outside world - and the local police force. Pearse does a good job of conveying the menacing atmosphere of the imposing but bleak building high up in the Alps where sick and vulnerable people were once sent to recover in the mountain air. Dark deeds are hinted at.

This is an all-action crime caper (despite grim subject matter) with short chapters and plenty of thrills. I felt, as with many first novels, that Pearse tried to pack too much in. She is obviously a writer bursting with ideas but sometimes less is more. Her main character, Elin, is well drawn but I found some of the lesser characters (including the villain) quite hard to remember. The author is very fond of noting emotions which flicker across faces but we never quite find out what these emotions are. Much is promised but not so much delivered. And the final reveal didn't really live up to the promise of the rubber-masked ghoul of the first few chapters, who I did find genuinely scary.

Most of the ends are tied up satisfactorily and I'm not giving anything vital away if I say that Elin's personal life appears to be back on track. There is one very mysterious note right at the end of the book which indicates to me that Pearse could be planning a second outing for Detective Elin Warner. And if so, I think she should be encouraged.