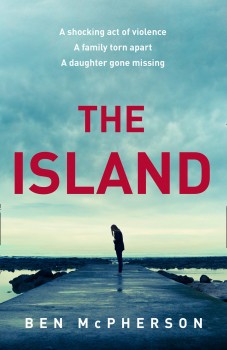 Scottish Cal and Norwegian Elsa leave their home in Washington DC to stay for six months in Norway, with their two teenage daughters and a baby son. The change of scene brings a devastating change to their lives: 15-year-old Licia vanishes from a summer camp on a tranquil island where two men shot tens of youngsters.

The Island hits you hard from the very first paragraphs. There’s an idyllic image of a 15-year-old girl ‘sleeping alone on a grassy bank at the side of a glistening fjord.’ And then are distant voices of more girls attending the International Future Female holiday camp; visions of empowering the youngsters, respect for the others and the environment. The true Norwegian dream …
But the tranquillity of such a serene moment is ruined as shockwaves of a bomb explosion come from the capital city nearby. Two police officers arrive at the island and round up all the teenagers in one place and start shooting. The girl realises that the men cannot be the real police, attempts to warn others and help a younger boy, and tries in vain to escape from the site of the massacre. Then she vanishes.
The nation is in shock. Devastated parents of 91 murdered victims cannot comprehend what had happened in their safe country. A year later a trial is held of two brothers, representing Tactical Brigades of the Knights Templar.
Licia’s parents Cal and Elsa Curtis cannot move on after the massacre. They delve into their missing daughter’s secrets and discover strange activities of their younger girl Vee. Their personal microcosmos shattered, doubts and suspicions of one another appear. Elsa seems more mysterious and aloof. Cal reaches out to charismatic Father Bror of the Patriotic Order of the Temple Knights, who had known Elsa in the past and who offers advice. Because now the couple distrust the police even if Cal and the Chief of Police form an uneasy friendship.
Ben McPherson weaves this chilling, unsettling story of grief and despair into the modern take on the Norwegian reality. His detailed razor-sharp perception of differences between cultural and social aspects of different societies gives drama and depth to the vividly authentic main characters who struggle to process their trauma.
Elsa, an uncompromising photographer and quintessential Nordic goddess, lives by the principle of absolute honesty in her approach to life. Cal, a Scottish satirist, remains a foreigner, an observer, slightly adrift in Norway where the family have moved for a while after living in the USA for many years.
As a spectator to the national tragedy he feels that his own family has fallen apart as a result of not knowing if Licia is dead or alive, whether she somehow managed to survive the massacre, and at the same time hearing his little girl hailed as a hero. That last element makes him equally proud and concerned: video footage shot by a TV crew in a helicopter shows a girl wearing a distinctive dress and saving lives of other youngsters. But an old photo of Licia holding a gun during a shooting practice in the USA emerges and appeals to those blinded by white power.
The aftermath of the terrorist attack by a white supremacist in July 2011 in Oslo and on Utøya island echoes throughout this gripping intense novel, and occasionally makes for disconcerting reading as The Island is inspired by true events. However, the author meticulously analyses the aftershock experienced by all members of the society and the emotional consequences impacting on the Curtis family’s perspectives and that process of change, of attempting to rationalise their responses, of processing all contradictory feelings, is told with sensitivity and understanding.
This psychological thriller is deftly penned by an author who sees even the smallest differences in the changing society, and through this prism he delivers an outstanding study of personal heartbreak.