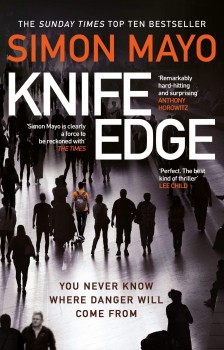 Seven journalists are murdered on a single day in London. They all worked for the same news agency. The question in everyone’s mind is who will be targeted next. It’s not a happy thought for Famie Madden, or her colleagues, but that doesn’t stop them when a possible lead turns up.

The London rush hour proves deadly for some as a series of attacks is launched against commuters: a woman stabbed in the market just outside Euston, a man knifed to death on the steps of a tube station, another man knifed near his flat, a woman with her throat cut on a bus, a man stabbed and then pushed in front of a train on the underground and so it went on. Seven people dead. Seven murders.

Journalist Famie Madden is at work in the busy office of the International Press Service when the shock registers that the woman who has been brutally stabbed to death is one of her colleagues, the head of their Investigations Bureau. Then shock after shock registers as the identity of the other victims becomes known. They are all journalists, all people she knew, all colleagues she’d worked with.

The newsroom is stunned, barely managing to hold it together to carry on doing their jobs, reporting the news as it comes in, even when that news concerns a vicious, deadly attacks on people they knew. No one can even begin to guess why the journalists were targeted, but the obvious place to start is by looking at what they were working on when the attacks happened. The strange thing is that there are no clues left behind on their desks or on their computers. They all seemed to have stopped making notes at about the same time.

The shock and potential personal threat is too much for several of the journalists and resignations soon start to come in. Famie feels much the same. Travelling from work to home and vice versa has never felt threatening before, but now Famie is looking over her shoulder the whole time and starting at shadows, especially when she starts to receive mysterious messages to her phone. Famie can’t decide if the messages are a warning or a threat, but she knows she needs to find out.

Knife Edge is a sharply written as the title suggests, and with the Charlie Hebdo attacks in mind, this sort of targeting of journalists is by no means a stretch of the imagination. Simon Mayo does a good job of capturing the sense of shock at being targeted simply by reason of the job you do and, to an outsider, at least, his view of the seemingly ever-frantic newsroom came over as carrying the ring of authenticity. There’s enough jargon to make it clear that it’s a world most of us don’t inhabit, but fortunately there’s no danger of it descending into incomprehensibility.

The terror angle is well-played, and as the book headed inexorably towards an explosive climax, I’d reached the stage of not having a clue who would make it out alive. I was just going with the flow and hoping for the best whilst preparing for the worst. Mayo keeps the story firmly grounded and doesn’t veer too far into the realms of tin hat conspiracy theories, for which I was grateful. The police come over as not too bright, but then Famie and her former colleagues need an excuse to continue their own off the books investigations, so as a plot device I was happy to give that convenience a free pass.

Knife Edge is a good, solid home-grown thriller, with a believable plot, characters that held my interest and a heart in mouth climax. It demonstrates the old adage that the security services have to be lucky all the time when it comes to foiling terror attacks, whereas terrorists only have to be lucky once. In uncertain times, it’s a sobering thought.