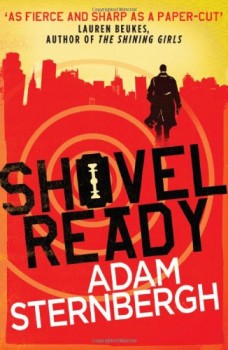 In a future New York devastated by a series of bombings the wealthy live in virtual reality, and Spademan offers to kill without asking questions.

Shovel Ready postulates a New York largely depopulated after a terrorist dirty bomb hit Times Square, followed by a series of further explosions. The few rich staying around spend their time in ‘beds’, devices which give them access to the virtual reality of their choice; the poor scratch a living in a dangerous and dirty environment.

The protagonist of this tale is Spademan, formerly a garbage collector whose wife died in the bomb and who has since developed a career as a hit-man. Spademan asks no questions except whether his targets are over 18; if they meet that proviso he has no compunction and his box-cutter is ready for action. His latest victim looks to be (just) old enough to qualify, but when he realises she is pregnant declines to fulfil the contract. As it turns out, however, she has some powerful connections with an interest in the outcome.

The book is written in the first person present tense, and many of the sentences are short and punchy (two to three words). The direct and informal style thus created may appeal; the omission of inverted commas for dialogue less so – sooner or later the reader always loses track and this can be annoying. As far as the content goes, the adjectives with which the cover is adorned: ‘fierce and sharp’, ‘savage future noir’ are fully justified. Life in future New York is very bleak, with services failing, and the nihilist protagonist, sprinkled with a few nasty incidents of violence and murder, provide a real chill.

Conceptually, however, the plot does present a few difficulties. The problems which led to such devastation in New York are limited to that city, and it is difficult to understand why the rest of the country has not rushed in with resources that one would expect after such a catastrophe. The disruption of services also feels a bit random: the electricity supply is apparently reliable, as are the train services, but it is necessary to take a rowboat with an outboard motor to cross the Hudson.

The Spademan also feels a little phoney, supposedly so devastated by his wife’s death that he is prepared to kill without compunction. But his insistence about the cut-off date at 18, and his exertion to stay alive but willingness to sacrifice himself in the cause of a girl he has just met, suggest he has a strong sense of human values. However, in total Shovel Ready has something fresh about it, and this debut novel may appeal, especially to those who like dystopian futures.