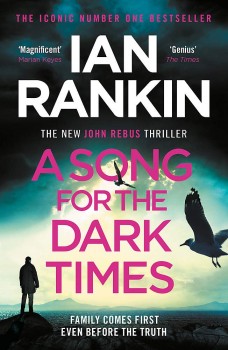 A Song for the Dark Times

John Rebus always focused on his job. But family is important which he realises more than ever when his distraught daughter Samantha calls in the middle of the night. Her partner Keith, interested in the old POW camp on the windswept coast, has gone missing. Rebus knows he has to help her.

Once a cop, always a cop … John Rebus is retired, not feeling too great health-wise and has just moved to a new flat to avoid climbing stairs. When he receives a call in the middle of the night from his daughter Samantha, he knows straight away that this will not be good news.
Her partner Keith has been missing for two days, his laptop and phone also gone, and Rebus wastes no time in deciding to help her as he fears the worst. Experience from a lifetime in the police makes him certain that Samantha will be the prime suspect.
As he drives from Edinburgh to the small village of Naver on the windswept coast where she lives, he feels the usual contradictory emotions as he wasn’t the best hands-on father and always prioritised his job.
Samantha indeed becomes one of the suspects, especially when soon after Rebus discovers Keith’s body at the notorious Camp 1033, where ‘aliens’ long residing in the UK and captured German soldiers were imprisoned during the war. The place holds many painful memories but according to Keith it should have been bought and opened to visitors.
Incorrigible as always Rebus keeps pushing himself and those around him, getting under the feet of the main detective and rattling people who don’t really want to share their memories of the camp. His devastated daughter struggles to deal with her own grief and conflicting emotions. Their difficult relationship is portrayed sensitively and with nuances, and an undercurrent of warmth.
Meanwhile in Edinburgh, Siobhan Clarke and Malcolm Fox join forces and investigate a murder of a young rich Saudi man Salman bin Mahmoud, famous for his lavish lifestyle and fascination with James Bond. The victim was known in the circles of other international students and wealthy investors, including a former member of parliament becoming a property developer, and for making waves. Salman’s closest friends are in the dark as to any motives for the killing, but the hard-boiled Scottish police continue to follow every lead, no matter how tenuous.
In A Song for the Dark Times Ian Rankin also weaves current themes, with references to Brexit and thoughts on the WWII past as the old prejudices still linger underneath the surface. Having not actually made an effort to get to know Keith, Rebus now realises that the man “had a good heart and he cared about people. That’s why the camp fascinated him – he saw echoes in it of things that might happen again.” This sentiment is tinged with sadness and understanding of how history might repeat itself.
The book has a no-nonsense approach, occasional dry humour and well-balanced banter between two groups of the main characters: Rebus and the locals in the quite isolated community by the coast, and the police team working on the murder case. Lightness of style and variety of details add depth to both subplots.
Ian Rankin creates a vivid intricately constructed living and breathing Edinburgh, a city with layers of secrets and a complicated connections between all spheres of the society – big-time gangster Cafferty, some bottom-of-the food chain sidekicks, a potential risqué video ready to be sold to the highest bidder, and the ordinary life. The sense of time and location is brilliant, and so is this book.