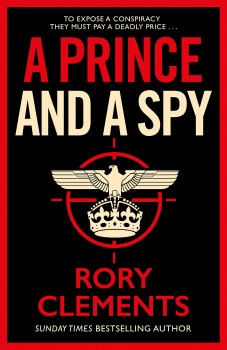 Ex-journalist Rory Clements has abandoned the 17th century for the lead-up and early years of the Second World War and a new hero, Tom Wilde, a Cambridge-based American professor specialising in Elizabethan espionage history.

This dramatic, twisty and intelligent thriller is by far the best of the developing series so far, but equally ideal as a standalone. It’s not just a compelling protagonist – Wilde is a widowed, good-looking, motorbike-riding, ex-champion amateur boxer who is also superbly bright, analytically logical and everyone’s idea of what a superspy should be. He’s now been co-opted to the London office of the emerging OSS, Colonel ‘Wild Bill’ Donovan’s Office of Strategic Services and forerunner of the CIA, and is also completely believable and in every other way totally ‘normal’.

Clements’ meticulous homework and realistic backgrounding continue a tradition going back to Buchan and Wheatley with more than a nod to Frederick Forsyth in the skills of developing ‘faction’ – adapting real incidents and characters to give verisimilitude to his stories. Here he takes one of the great unsolved mysteries of World War Two as the basis for a plot which reaches right to the very top of the hierarchies of the countries involved in the European theatre.

On August 25 1942, a Sunderland flying boat of 228 Squadron carrying George, Duke of Kent, brother of King George VI of England and fifth in the line of succession, then serving in the Intelligence Division of the Admiralty, crashed into Eagle’s Rock, a hillside near Dunbeath in the Scottish Highlands.

The only survivor of 15 passengers and crew was the plane’s rear gunner, Flight Sergeant Andrew Jack. Bound by the Official Secrets Act, F/Sgt Jack never said anything in public about the crash, but after his death his niece claimed he had told his family that the duke was actually piloting the flight and that there was a mysterious extra person aboard.

Clements applies both fact and rumour to offer a more than credible alternative to some of the rumours that abounded at the time. The Prince, at the behest of his elder brother the King, for whom he had carried out several similar secret missions, was in fact returning from a top secret meeting in the Swedish lakes with his bisexual distant cousin and friend Prince Philipp of Hessen, at that time a senior Nazi and close to the German leader, to sound out possible British reaction to some sort of peace initiative in the west to allow Hitler to concentrate on his destruction of Russia.

The moving force behind the German attempts to cover up both the meeting and the leak is SS Gruppenführer und Generalleutnant der Polizei Heinrich Müller, chief of the dreaded state police the Gestapo and a truly evil man who was personally responsible for many thousands of deaths. Despite being at Hitler’s bunker in the final weeks of the war in Europe, he was never caught nor his body identified.

This brilliantly compelling story offers Wilde the chance to highlight the political polarisation and mistrust, underlaid with a simmering violence rife both the Nazi and Allied sides of the conflict. It’s a colourful history lesson featuring many real characters who are never out of step with the facts, and is also a gripping spy thriller with unusual and well thought through plot twists from the start, a real atmosphere of fear as well as offering several classic moral dilemmas.

Clements has an immaculate grip on time and place, blending both effortlessly with an all-action, fast-moving, but complex plot. He is far too good a writer to allow the reader to get too settled before the story races off in a new direction. The reader will be left trying to pick out fact from fiction at their own peril.

This is another triumph for the decent and moral Wilde who somehow manages to avoid all distractions which would tempt lesser men. Clements is a fine writer who brings the reality and urgency of a news story to the framework of a novel.