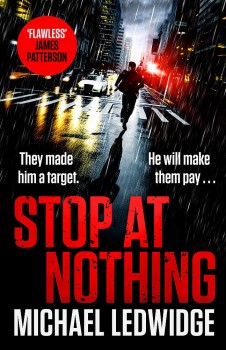 When a plan crashes in the sea off a remote island in the Bahamas, diving instructor Michael Gannon ends up in possession of a very dangerous secret and on the run from some ruthless enemies.

Michael Gannon is fishing alone in the Caribbean on his boat, the Donegal Rambler, when a plane crashes into the sea, breaking up on impact and sinking. He’s a diving instructor and has his equipment aboard, so after calling in the accident over the radio, he quickly kits up and goes in search of any survivors. He isn’t surprised to find that the passengers on the luxury Gulfstream are all dead, but what does surprise him is the blueish colour of their skin, suggesting that they had already been dead of asphyxiation before the plane hit the water.

Back on his boat, Gannon sees various items bobbing in the water, looking like luggage from the plane crash. The first bag he investigates contains a Glock 18 automatic pistol. The second contains a fortune in dollar bills and diamonds. His immediate thought is that the plane’s occupants were engaged in a drugs deal. That is all he can think of to explain the diamonds and that amount of money.

Gannon’s got debts, a lot of debts. He stashes the money away, figuring that no one will know he’s found it. It’s a dangerous move that catapults Gannon into a whole heap of trouble and sends him on the run from rogue elements in the FBI, determined to cover up the plane deaths. The more Gannon learns, the deeper and more dangerous the conspiracy becomes. But his opponents aren’t the only ones who can put up a fight.

Michael Ledwidge serves up a highly geared chase thriller, pitting his main character and his only allies, Ruby, an officer from the naval safety division and Stick, a New York cop, against the sort of pursuit that would make anyone quail. The FBI can call on immense resources and they’re backed by a team of mercenaries, led by an ex-Delta Force operative. All the cards seem to be completely stacked against Gannon but he’s still capable of staying one step ahead of them, displaying almost as much tradecraft and ruthlessness as Ruiz, the mercenary leader.

I do like a good chase thriller, and that’s exactly what Ledwidge has produced. The stakes are high, the action is relentless without ever being boring and the reveals are slow to come, all serving to ramp up the tension to an almost excruciating level. I liked Gannon and, as was no doubt intended, I was slow to cotton on to just how dangerous he was capable of being. I particularly enjoyed a scarily well-written scene deep in one of the famous Blue Holes of the Bahamas, underwater caves that have lured many unfortunate divers to their deaths.

If you’re as much of a sucker for action thrillers as I am, Stop At Nothing certainly won’t disappoint.