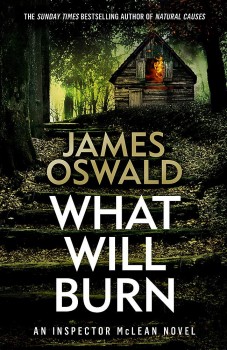 Edinburgh’s most entertaining maverick cop is back, but as he didn’t follow the correct procedures on his last investigation (no surprises there!), Tony McLean has been busted down a rank and is back to being a detective inspector. As anyone who knows him would expect, he’s not overly bothered, as the promotion never sat terribly easily on his shoulders, and he doesn’t need the extra money that came with the rank. Being a DI involves less paperwork and means he can get boots on the ground (his own) without drawing disapproving comments from his superiors.

McLean is the go-to person when weird stuff happens and DC Janie Harrison is very tempted to ask him to take a look at the aftermath of a fire in a remote cottage, tucked away in woodland on a country house estate outside Edinburgh. A woman’s badly burned body has been found, and Janie feels that there’s something off about the scene, but she can’t put her finger on what’s bothering her. The post-mortem quickly elevates the case from a possible accidental death to murder. The woman was badly beaten and set alight and the case inevitably ends up on McLean’s desk.

On top of the murder investigation, McLean has to contend with a new station chief, who’s moved up from the Met to Scotland following the retirement of Edinburgh’s Deputy Chief Constable. Chief Superintendent Ellwood quickly makes herself popular by giving assurances that her overstretched officers won’t suffer any further reductions in their workforce, but neither Janie Harrison or McLean seem inclined to fall for the woman’s superficial charms, and it soon becomes clear that she has more than a professional interest in McLean.

As ever in James Oswald’s Edinburgh, the grim reaper rarely bothers to get out of bed for just one appearance, and they’re equally rarely just common or garden deaths, so when a man is inexplicably crushed, and another seems to have suffered spontaneous combustion, McLean and Janie are left struggling to find the connection between the cases. For the reader, the flashbacks to the time of Scotland’s witch persecution provide clues to what is happening but how things are being done is harder to get a handle on than why, and the identity of the perpetrator is harder to work out than it might first appear.

For me, one of the joys of this series is the large supporting cast, many of who are not entirely what they seem. I always smile at the appearances of Mrs McCutcheon’s cat (yes, that’s how the moggy is always referred to, despite having lived with McLean for numerous books now), who gains a companion when McLean brings home the murdered woman’s cat. Then there’s the eccentric medium Madame Rose and on this occasion Oswald brings in an added dimension with a subtle crossover with his other series featuring London copper Constance Fairchild.

It was very satisfying to see the book series focus more on the eminently sensible and likeable Janie Harrison and she looks like getting more development as the series progress. I liked seeing McLean cope with being a long way outside his comfort zone when it came to dealing with his predatory female boss.

He adopted his patented ‘I am so done with this shit’ approach, with varying degrees of success, and watching him handle the subtle pressure from all sides in this was great. And talking of predatory women, McLean’s arch-nemesis, the suavely dangerous Jane Louise Doe, is back and exuding her usual air of menace. She always adds spice to any story.

This is a series that consistently delivers on all fronts, from police procedural to something with a darker edge even than murder, and the two strands are woven skilfully together. Knowing the previous books isn’t necessary, although it does add additional depth, so don’t hesitate to jump in at this stage.