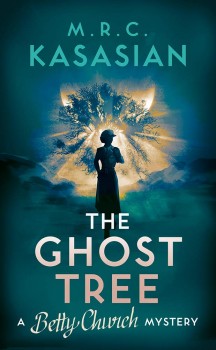 Inspector Betty Church must mobilise the incompetent police she leads to investigate the disappearance of her childhood best friend and to battle several forms of discrimination as she follows a trail of murder.

The inept, idle and incompetent guardians of the law in the crumbling Suffolk seaside town of Sackwater – where Inspector Betty Church grew up and which had never seen a policewoman, let alone one of rank, before her return – again play a major part in this third of MRC Kasasian’s clever and beautifully written World War II series.

In 1914, during a rounders match between local boys and girls, Betty’s best friend, 15-year-old Etterly Utter, runs inside the hollow trunk of the Kings Oak, known by superstitious locals as the Ghost Tree – and disappears.

The young Betty had noticed but kept silent about seeing a shadowy man. The police find no trace. Her family and friends wrack their brains but come up with nothing. Slowly life returns to normal. The hole in the tree is boarded up and Sackwater moves on. Soon after, a boy from the opposing team dies in an apparent accident involving a skittish horse belonging to a gypsy family running a local farm.

Twenty-six years later a skeleton is discovered in the woods. Most clues have long since decayed, but an unusual necklace is found with the remains. Betty, now Inspector Church, recognises the piece as one belonging to Etterly. Fearing the worst, she is determined to solve this strange case and enlists the help of her godmother March Middleton, assistant – some would say partner – to the famous Victorian personal detective Sidney Grice.

Etterly’s family have never given up hope that their missing daughter is still alive and will one day return. They refuse to accept Betty’s logical assumption and that makes her even more determined to solve the mystery, hampered as always by the staff of Sackwater Central.

All the hopeless bunch, bar the dreadful wimpish twins, return under the sometimes near control of the veteran Briggs who at times demonstrates an unexpected empathy and sensitivity. Local newspaper editor Toby, on who Betty has designs of a very unladylike nature, also features again.

This is an intriguing mystery that plunges the reader into the seamier side of life. Wartime events such as Dunkirk provide a backdrop along with the day-to-day realities of rationing and blackouts. And as the mystery is finally resolved, there is a heart-warming message about the strength of unconditional love and the possibility of forgiveness.

Church is an inspired creation very much of her time. She knows that without the war she wouldn’t still be in the police, let alone an Inspector. Her first-person narration suits both the plot, and her strong, confident and witty character leaves you guessing at the darker and more unnerving story behind the slapstick.

But I wonder how long readers will continue to be amused by the misdeeds of this collection of the sweepings of almost every constabulary. No one can be that continually stupid! Shakespeare and Dickens both used comic interludes to throw tragedies into contrast, but there has to be a limit to the author’s trademark humour, his fondness for wordplay and puns, and his enthusiasm for giving characters quirky pseudo-Biblical names.

The heavy use of the near-incomprehensible local dialect doesn’t help either, except to establish time and place for the two parts of the story, set just before the outbreak of the first world war and those grim months in 1940 and the disaster and heroism of Dunkirk, when Suffolk might have been a different world for people in most of Britain.

There’s a strong theme presented through the formidable personality of his disabled heroine – discrimination against women, the disabled and the travelling community, all common at the time, feature prominently. I was, as usual, sucked in by Kasasian’s sheer storytelling ability and his skill in turning a run-of-the-mill cold case plot into a first-class and enjoyable read. He always drags the reader back to the central business, no matter how many false leads. And that is what makes this book so worthwhile.