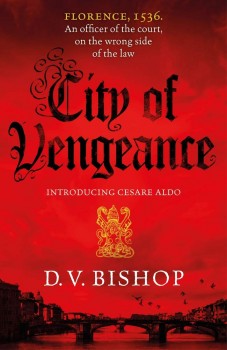 Court officer Cesare Aldo must find the killer of a prominent Jewish moneylender in a Florence riven by internal plotting, rivalries and strife.

DV Bishop’s explosive series debut is set in the sumptuous palaces, dark and sordid prisons and filth ridden streets of Renaissance Florence. A complex and intriguing plot examines the subjects of love, honour, politics and religion, as it weaves its way through the treacherous streets and courtyards of a 16th century city, where danger may be waiting at every dark corner.

In the winter of 1536 Florence is in turmoil. Its ruler, the volatile Duke Alessandro de’ Medici, is more interested in his sexual conquests, flamboyant clothes and extorting as much wealth as possible from his citizens of whom the Medici employ at least half, probably more, in their various businesses.

When a prominent Jewish moneylender is murdered in his home, a death which could have wide implications in a city powered by immense wealth and equally by debt, court officer Cesare Aldo is given just four days to find the killer.

During his investigations he uncovers a plot to overthrow the Duke, spearheaded by his resentful and ambitious cousin Lorenzino. But a corrupt and brutal rival officer of the court is determined to ruin Aldo by exposing details about his private life and delays the investigation long enough for the assassins to strike.

As Alessandro’s body is carried out of the Ducal palace wrapped in a carpet – nothing new there then – this convincing story builds to a dramatic denouement. This is a fine example of quality historical fiction, rich in period detail and beautifully crafted with a deep and sensitive understanding of human frailty. It’s richly atmospheric, fluid and fluent, and this compelling journey into Florence’s dark past convinces to the very end.

The central character of Cesare Aldo, a former mercenary soldier who’s now an officer of the city’s feared criminal court, is a man as fitting for our times as for the bloody streets and twisty, toxic politics and rivalries of the ruling Medici family he must deal with to survive. Aldo is a great creation to whom readers will instantly warm. He’s inwardly compelled to bring justice for those who deserve it, and he is resourceful, driven, cunning, bold, disquieting and complex, all the while forced to hide his real nature.

It is a mark of Bishop’s ability that even the supporting characters – the pompous and venal officials, the decent and honest Constable Strocci who plays a key part while pursuing his own investigation into the street murder of a homosexual male prostitute and the keen, if clumsy young Constable Benedetto – shine through.

Of more interest as this story develops will be the ambitious Signora Maria Salviati, widow of the renowned condioterre Giovanni de’ Medici, known as Bande Nere because of his black armour and Aldo’s former commander. Like many Medici women she has both a formidable intelligence and capacity for intrigue and is determined to advance the cause of her teenage son Cosimo despite a desperate current lack of wealth or influence.

This dramatic and compelling book, with the larger than life, complex, charismatic and enduring and towering figure of Aldo holding it all together, is for all who enjoy well-written and enthralling historical mysteries.