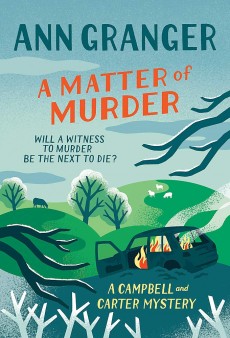 A Matter of Murder

Drop-out Miff Ferguson disturbs a killer disposing of his victim and is forced to flee to escape the man who now wants to dispose of the only witness to the crime. When a second member of the dead girl’s family is found in a blazing van Detective Inspector Jess Campbell and Superintendent Ian Carter must try to solve the mystery.

Former Foreign Office staffer Ann Granger needs to make up her mind whether her ongoing Cotswold village Campbell and Carter series can continue to flourish in its present almost cosy mode of traditional country policing – or is going to have to be brought rather more up to date.

She’s impressively productive – this is her 36th novel and the seventh murder mystery to feature the Gloucestershire police pairing of Detective Inspector Jess Campbell and Superintendent Ian Carter, and she never appears to change her style.

There’s little or no violent action, no chases, no shoot-outs, no evil master criminals, and yet she somehow manages to gain and hold readers’ attention with her cleverly drawn characters, a telling eye for human foibles and frailties and a reliance on the reasons for the crime and a touch of psychology mixed with investigative technique to make what could be quite mundane stories something to keep you turning pages. Her plotting is solid and intricate but has an old-fashioned feel – and her one-dimensional detectives are distressingly devoid of any realistic personal life.

Campbell and Carter are both serious professionals, willing to take their time over any major decision – including what appears to be a slowly growing personal relationship. But that is subjected to considerable amounts of side-tracking and extraneous detail – in this case the doings of the near-feral Button family, which is not too relevant to the plot and quite distracting – like many parts of any real-life major investigation. And while accepting that Gloucestershire still has in many ways yet to catch up with the 21st century, at times it can appear all just a little too idyllically bucolic.

Former banker Miff Ferguson has chosen to opt out and for two years has been happily living rough. But as he seeks shelter for the approaching winter, he stumbles across the dead body of a young woman in a dilapidated warehouse. Miff, who comes across as a near total wimp, realises he is not alone, and that he has been spotted by the killer. He escapes after an improbable chase across back gardens, but is forced to abandon his life on the streets and take refuge with his aunt and uncle in the village of Weston St Ambrose to avoid the killer now hunting him.

He’s embroiled in a tangle of lies of his own making and a deadly game of cat-and-mouse, and begins to see some sort of future working in a garden centre which has an attractive female owner. But when another body, later identified as the protective brother of the dead girl, is discovered in a burned-out car at a local farm, it becomes clear that neither Miff nor those around him are free from danger.

Meanwhile, Campbell and Carter join forces once again with the team of police at Bamford to piece together the puzzle, aware that they must establish the link between the deaths before another life is lost.

This story of a murder novel which blends an almost gentle touch with a dash of wit is, as usual, impeccably plotted and Granger’s characterisation is sharp and astringent. Old-fashioned it may appear, but this makes little pretence to being other than a clever procedural – and, as such, there are few better authors!