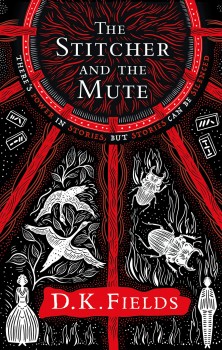 The Stitcher and the Mute

In the United Realms there are no elections, instead each year the leading group is chosen by picking which of them tells the most compelling story. As the election proceeds, Detective Cora Gorderheim becomes more embroiled in solving the crime and also resolving personal issues.

This story is the second volume in the Tales of Fenest trilogy. The principle is that in an alternative world, the United Realms, six nations strive to work harmoniously together. Every five years they pick which one of the realms will lead by choosing the one which delivers the best storyteller to tell a story and be judged by the Audience, a panel of 50 peers from across the realms. The population follows the process avidly, the lucky ones attend the actual telling and others visit the Hook, where a clue to the content of the story is made public before the event.

In this part of the unfolding of the storytelling, Detective Cora Gorderheim becomes even more deeply embroiled in resolving the earlier crimes and following up more associated murders. Cora’s personal life becomes entangled and her family history returns to haunt her. Her career is put at risk as she is warned to avoid interfering in the Assembly, the parliament of representatives, despite the fact that such investigation would help to resolve the crime. Her safety is compromised as she becomes the object of unpleasant and life-threatening interventions.

Something is deeply wrong in the United Realms. The south is said to be struggling and Cora travels deep into a desolate landscape facing exceptionally demanding physical trauma. The depiction of this resonates with the reader as echoes of climate change are depicted in this parallel environment.

Once again, the reader is privileged to hear two more of the stories told by two other realms. These stories are fascinating, depicting life in the different realms but also deep with hidden meaning and messages which are intriguing to cogitate upon in understanding their context in the story and their potential significance in resolving just who is killing these people.

This volume more than lives up to the promise of volume one. However, I think that it is important to have read the first before reading this book because otherwise much of the plot and principle would be quite incomprehensible. I cannot wait for part three.