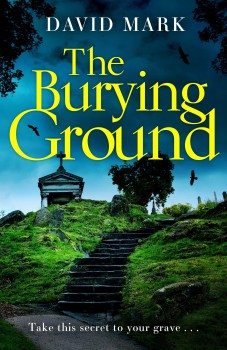 David Mark’s latest stand-alone, the story of the friendship of two very different women, skips between the years 1967 and 2010, but has its roots deep in the countryside of south west France more than 30 years before they first met.

This brilliant and very dark psychological mystery is nothing like the clever Aector McAvoy series which made Mark’s name. It’s primarily a historical espionage story, and is a bit like digging in a cemetery, which is where the tale opens. The fresher bodies may be nearer the surface, but dig a deeper and you’ll discover they are only the latest in a long history of death.

It’s a morbid and unpleasant simile but given the setting – the isolated village of Gilsland, hardly a part of the 20th century, under the shadow of Hadrian’s Wall where there have violent deaths since the dawn of recorded history – it sets the scene for what is to follow.

The fact that the book is itself an exhumation – it was first published in hardback by Severn House in June last year under the title The Mausoleum – which seems particularly appropriate!

A storm destroys a mausoleum in a cemetery, uncovering the bones of those long dead – and also a fresh corpse, wearing a modern suit and carrying a small bag. The grim discovery is made by Cordelia Hemlock, still mourning the death of her young illegitimate son, and her unlikely friend from the village Felicity Goose, a well-meaning but nervous local wife and mother of two, who has been brought up with all the traditions and superstitions of the border area.

This pair are the focal point of the story which explores their developing friendship over more than 30 years from 1967. Disgraced academic Cordelia has been exiled to Gilsland by her husband, a senior civil servant who needs a trophy wife to cover his own homosexuality.

A pair of unlikely friends had been visiting the cemetery when a violent storm struck the village of Gilsland in 1967. The weather conditions are so severe that they barely have time to register the image of a dead man in a blue suit with a canvas bag over his shoulder before they run for cover. A neighbour, Mr Fairfax, goes to check out what the women have seen, but doesn’t come back and his body is later found having crashed his car on the road out of the village. A local historian - some might say busybody - Fairfax has been interviewing local people for years for a book, and some suspect that he might have uncovered one buried secret too many.

David Mark weaves a little bit of small town gossip, scandal and indiscretion with his customary air of menace bordering on horror, but inevitably places his own distinct twist on small close-knit communities with secrets to hide. Gilsland, with its peculiar northern border geography, has a history built on layers of bones and secrets, the site of an ancient Roman fort, a proposed site for a rocket base.

More significantly, it was once home to a POW camp built by locals during the war, housing some of the most dangerous and fanatical Nazi prisoners. Some of the reformed prisoners have later settled in the region, which makes for interesting material for a local historian gathering information for a proposed book. But the documents behind left by Fairfax, discovered by Flick and Cordelia, hint at some darker history, as well as evidently some more recent suspicious deaths.

The book is related from a distance of 30 years in testimonies by the two now much older women, each with their own troubled backgrounds and personal histories. There are evidently more grim subjects and colourful characters for David Mark to detail and describe in his wonderful and poetically macabre way.