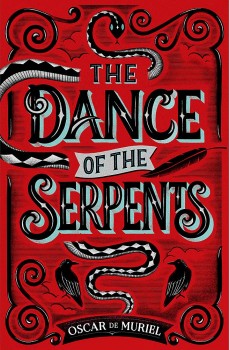 The Dance of the Serpents

Paranormal investigators Inspectors Frey and McGray find their lives under threat by Royal order in a Gothic world of blood, bats, folklore, superstition and murder.

Oscar de Muriel’s conflicting and conflicted partnership of paranormal investigators, ‘Nine Nails’ McGray, the foul-mouthed, hard-drinking Scot, and the louche and patronising college-educated London gentleman Ian Frey, with his love of logic and correct procedure, face their toughest case yet – with their lives at stake by Royal order if they fail!

With his usual spellbinding mix of slightly mangled history, horror and rough, even bawdy, humour, the Mexican-born, Manchester-based chemist, translator and violinist anchors his story in areas in which he has particular expertise and it’s always worth reading his author’s notes, which both inform and partly explain.

This is, in effect, a follow-up to book two of the series, A Fever Of The Blood, which saw the two paranormal investigators from the Commission for the Elucidation of Unsolved Cases Presumably Related to the Odd and Ghostly pitted against the infamous witches of Pendle. That ended with McGray killing the two principal witches – who had somehow become Queen Victoria’s major access to all matters occult and an alleged connection to her beloved late husband Albert.

De Muriel does the Queen no favours at all, portraying her as possibly illegitimate, grossly overweight, completely neurotic, and a sad and vengeful woman. Most of these accusations have some basis in fact. She was capricious. There were slurs and doubts about her parentage. At the end of her life she was massively obese. She did employ so-called ‘mediums’ to contact Albert. But there is no evidence to suggest she was the type of woman who would casually condemn two men to death for removing her ‘link’ to the spiritual world, or that she was unduly influenced by her conniving prime minister Lord Salisbury for his own advantage.

The story has Frey and McGray tasked with finding a new medium in the run-up to Christmas, when the Queen is obsessed with ‘speaking’ to her dead husband. From a freezing and snowbound Edinburgh to the grand York Minster and a final confrontation at Victoria’s retreat, Osborne House on the Isle of Wight, it romp and rattles along, peopled by thugs, witches – including a breakaway movement – ravens, cats, owls and other strange, stunning or creepy apparitions.

Amid this impeccably drawn, atmospheric, moody and dark setting of late Victoriana, several characters from the earlier books, particularly A Fever Of The Blood, reappear, including the resourceful and independent Miss Caroline Ardglass, whose family has been cursed to the 13th generation and who has been in hiding since those events and her grandmother’s disastrous attempt to marry her off to Frey. I am slightly apprehensive regarding a note of romance here and fear that De Muriel has a liaison in mind with comments about her ‘hourglass figure’ and ‘becoming blushes.’ Romance surely has no place in such a Gothically over the top – and gloriously preposterous – mystery story!

Other supporting characters including McGray’s sister Pansy also return and as usual his characterisation, even of the minor players, is perfect, and contributes to the overall menace and eeriness of setting and narrative. But as usual it is the relationship between the two protagonists which is the driving force of the story. Both have unwillingly come to accept they actually have a deep bond and each would be a lesser man without the other.

The rough, tough McGray, a superstitious believer in the powers of the spirit has, despite their constant bickering which at times must remind readers of an old married couple, come to appreciate the quieter strengths of his colleague, despite the additional drawback of his essential Englishness. Frey is his turn has come to realise there is occasionally a place in detection for more direct action and that not everything in life can be logically explained.

De Muriel has produced yet another hugely enjoyable, entertaining and well-written historical romp without too many of the glaring anachronisms which so often mar this type of story.