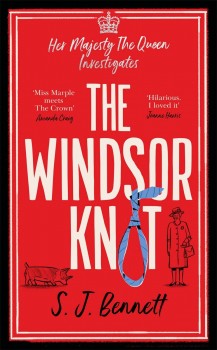 When a visitor to Windsor Castle is found dead in suspicious circumstances, everyone hopes the investigation can be wrapped up before it hits the press. But when the police and MI5 seem no nearer to a solution, the Queen has to take time out of her day job to make some enquiries of her own.

Historical figures solving crime are nothing new, although how William Shakespeare managed to write so many plays while sleuthing is something of a mystery, and the same goes for Agatha Christie and the Bronte sisters. But even against a backdrop like that, I wasn’t prepared for the prospect of Her Majesty Queen Elizabeth II as an amateur detective, I’d have thought her day job was busy enough, but apparently that’s not the case. Who’d have imagined that? SJ Bennett, that’s who.

In The Windsor Knot, a very enjoyable dine and sleep – not a sleepover, please – is overshadowed by the discovery the following day of a young Russian dancer, Maxim Brodsky, dead in a closet, apparently the victim of an autoerotic asphyxiation escapade gone tragically wrong. The Queen’s private secretary, Sir Simon Holcroft, isn’t looking forward to explaining that to The Boss, as she’s known to her staff.

But one hasn’t reached the age of 90 without having heard it all before, and such games are hardly newsworthy amongst the upper classes, although a death at Windsor Castle certainly is and everyone concerned is desperate to keep the news out of the clutches of the tabloid press, especially when it appears that the death is more suspicious than it first seemed.

The Head of MI5 sees reds under every bed, and is certain that Putin is behind the killing, sending a message to the British Establishment that nothing is safe – or sacred – and the spymaster quickly turns his attention to the Queen’s servants, causing a huge amount of disquiet in the castle. The harassed DCI in charge of the case is getting nowhere fast and Her Majesty is unconvinced by the fingers being pointed at the Russians.

With the help of help of her assistant private secretary, Rozie Ashodi, the Queen takes a very subtle hand in the investigation, pursuing her own theories and leads. An intricate knot soon becomes even more complicated.

Cards on the table, I’m an ardent republican with zero interest in the royal family, even though I was once inadvertently dragooned into a royal visit, but that’s another story … So what possessed me to pick up a cosy mystery with the Queen herself solving crime, I have absolutely no idea. To my complete surprise, I was immediately sucked in by a clever tale woven around one of the most well-known women in the world. Alongside her, former army officer Rozie Ashodi is also a standout character with an endearing mix of understated confidence and very obvious competence.

The upstairs-downstairs details hold the fascination of a fly-on-the-wall documentary with a difference, complete with amusing asides and insights into probably the most famous family firm in the world.

What would have improved the book is a firmer grasp of point of view, which has a tendency to bounce around the page like an errant squash ball. A little less reliance on the use of ‘one’ when HRH is thinking of herself would also have helped and I certainly don’t see Her Maj making grammatical mistakes like ‘try and’ instead of ‘try to’, which is a personal bugbear for both your editors!

But those minor quibbles aside, this is a wholly enjoyable romp through the highways and byways of Windsor Castle and Buck House. The murder mystery is also unexpectedly touching in places, particularly in the closing pages.

The Windsor Knot is the start of a series and I must admit I’m curious to see what the nonagenarian monarch and her extremely engaging assistant private secretary will get up to next. Real person fanfiction has just taken a very unexpected turn!