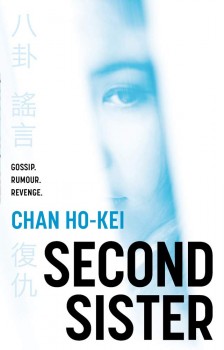 Nga-yee is devastated when her younger sister Siu-man jumps from their Hong Kong tenement flat to her death.  She finds someone who can help her satisfy her desire for revenge on the people who drove her to it.

After the early loss of their parents, Nga-yee is obliged to work long hours to support her sister Siu-man, who is still at school. She is devastated when Siu-man jumps from their Hong Kong tenement flat to her death.

Siu-man’s suicide comes as a horrible surprise, and although Nga-yee had been vaguely aware of her sister being unhappy, she had put this down to no more than grief over the death of their mother.

Determined to find out more, Nga-yee hires a private detective who discovers that Siu-man had been the victim of a frotteur on a train; a man was prosecuted and imprisoned. Subsequently, however, a post on social media claimed that Siu-man had falsely accused the man, and that she was a degenerate who had a history of making spurious accusations. This leads to a storm of vicious on-line abuse.

The detective is unable to take the case any further but puts her in touch with someone known only by the initial N. Nga-yee is at first repelled by N: he is dishevelled, his flat is dirty, and he is very impolite. However, his skills with communications technology prove to be extraordinary, and he is able to reveal who was behind Siu-man’s problems and provide an opportunity for Nga-yee to obtain her revenge.

Revelations slowly emerge about the background to the case which expose a history of on-line bitchiness and bullying. N’s ability to retrieve the chain of events is accompanied by a convincing explanation of the workings of the internet, much of which is interesting if only to demonstrate how communication can be subverted, and thus how to protect yourself.

Nga-yee spends much of the book very ignorant about social media and indeed much else, slow to recognise N’s expertise, which extends to acting and logistics as well as telecommunications wizardry. N takes on the role of teacher as he enables Nga-yee to understand that the truth is somewhat complicated and that several people through minor transgressions or omission contributed to her sister’s despair.

A parallel story details the developments at a small internet start-up in Hong Kong, where a big-name overseas investor arrives, and a key employee seeks to exploit this to his own advantage. There is an apparent connection to the main story which turns out to be other than suggested, providing an unexpected twist at the end.

Despite some minor criticisms – rather too much tell, an overly-naive protagonist and N’s suspiciously perfect expertise – I found Second Sister to be very readable. The slow release of revelations and developments sustains interest and builds to an unexpected conclusion. The theme of online persecution is certainly topical, and clearly a world-wide problem.