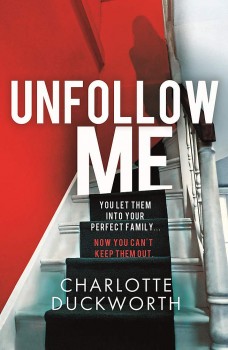 Violet Young seemingly has the lot – a gorgeous house in London, a successful husband and adorable kids. She’s also a YouTube influencer with a million followers. But when her social media presence suddenly goes dark, her fans go into meltdown. Conspiracy theories abound as to what’s happened to their icon as they set out to find out the truth behind Violet’s disappearance.

I should admit at the outset that I’m seriously bored with domestic noir. I gave Unfollow Me a go because the social media angle sounded intriguing – and it’s undoubtedly the book’s strongest point. As for the plot and the characters … Well, that’s quite another matter.

Unfollow Me appears to recline under the psychological thriller banner. There’s a soupcon of psychological and virtually zero thriller. When the reveal comes, it’s a case of ‘was that it? And …?’ One element of the ending, though, did give a chilling take on what the book could have been.

The lack of tension and pace isn’t helped by the multiple narrators structure. Most of the book is told by Lily, a single mum, and Yvonne, who is desperate to have a baby. There are occasional walk-ons from Henry, Violet’s husband. As you might expect, there are shady events from the characters’ pasts and the usual doubt as to who’s telling porkies. But the constant swapping of points of view means the book never builds up any head of steam.

You don’t have to like a character to care about them and to root for them. But you have to feel something – and I didn’t, for any of them. Ironically, perhaps the best fleshed-out character is Violet, who is a shadowy figure in the book (and that’s not a spoiler). If your life doesn’t revolve around kids, then you might want to avoid Unfollow Me.

What does redeem the book is its sharp take on the skewed world of social media influencers, whose seemingly picture-perfect world can hide a deeply flawed core. And Duckworth makes the reader question how women are portrayed online – the often demonised single mum, the woman who will do almost anything to have a baby, and those who seemingly have it all.

As a thriller, Unfollow Me doesn’t deliver. As an unflinching look at the murky and paranoid world of social influencers, it has far more possibilities and hints at what could have been a strong story.