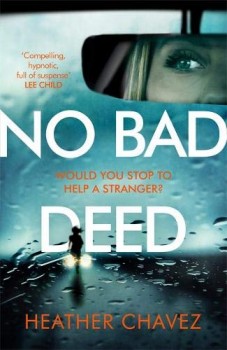 No good deed goes unpunished, as Cassie Larkin finds out when she stops to help a woman being attacked by the side of the road.

Cassie Larkin is driving home at night from her veterinary clinic when she sees a woman and a man involved in what looks like an altercation at the side of the road. Worried for the woman’s safety, she calls the emergency services. The dispatcher tells her to stay in the car for her own safety and not get involved. Fearing for the woman’s life Cassie decides to get involved after all, as once in her past she didn’t step up when needed, and that still haunts her.

The woman is badly injured and Cassie is threatened, but the man gets away before the police arrive, and he does so by stealing Cassie’s car, as she left the keys in the ignition. He also has her handbag and her house keys and now knows all about her.

Cassie’s husband Sam is unimpressed, to put it mildly, and it’s clear from early on that although Cassie still loves him, cracks are already appearing in their marriage. He seems to resent the long hours she spends at work, and there’s obvious tension. Then Cassie’s life quickly spirals out of control when Sam disappears whilst taking their young daughter Audrey out for Halloween. Sam leaves her with someone for a moment but doesn’t come back. Cassie quickly suspects he’s been having an affair, but she can’t believe he would abandon his own daughter with a stranger.

I rarely feel drawn to anything with a theme of husbands/wives/family members/Uncle Tom Cobley and all harbouring dark secrets but something about the blurb for No Bad Deed caught my attention and I was intrigued by the scenario Heather Chavez presented. Revelations come slowly, and only through the prism of multiple layers of complexity that hide the truth while still playing fair with the reader.

Cassie is a tenacious character, determined to protect her young daughter and teenage son at all costs, but I did feel there was a tendency to deal out a hefty thump from the stupid stick at some points for the sake of the plot and at times it was hard to resist the urge to yell at her very loudly. That didn’t spoil my enjoyment, though, and No Bad Deed is an assured debut from a talented writer who is capable of setting up a good story and then following it through with considerable style. I’ll even forgive her dishing up not one but two dogs for me to worry about!