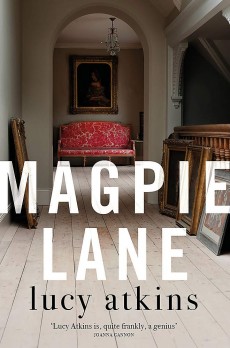 When the eight-year-old daughter of an Oxford academic goes missing, there are a limited pool of suspects, with the spotlight falling first on her parents and their live-in nanny.

When the eight-year-old daughter of a highly placed Oxford academic goes missing in the night, the first suspects are her father and stepmother, but it’s not long before the police turn their attention to her nanny, Dee, even though the woman was in London when Felicity disappeared.

Magpie Lane is a rare toe in the murky waters of domestic noir for me. But Lucy Atkins certainly succeeded in sucking me in with her tale of tangled relationships beneath the dreaming spires of Oxford University. She sets the scene well, with Dee being interviewed by the police, then moves into the background, with Nick Law, a former BBC executive taking up the prestigious position as Master of one of the university’s colleges, thrusting his wife Mariah into the stuffy, antique-laden Master’s Lodgings.

The highly strung Mariah, a woman who runs a business in London restoring antique wallpaper, sweeps through the house like a particularly frenetic new broom, insisting on redecorating the whole place, painting over dark wood panelling, consigning gloomy portraits of past masters to the attic and generally treating the place to the sort of makeover more usually seen on TV rather than in a centuries-old college.

Felicity, the couple’s young daughter, comes over as a child deeply traumatised by the death of her mother – from cancer, Dee presumes. Felicity has been seeing a therapist for her selective mutism, meaning that the only person she ever speaks to is her father, never to Mariah. The move to Oxford, with the prospect of a new school, has caused the child to regress even further, and it’s soon blindingly obvious to Dee that neither Nick nor Mariah has any time for Felicity, leaving her almost entirely in Dee’s care.

The book alternates between passages where Dee is being questioned by DI Faraday and DS Khan, running a time-honoured good cop/bad cop routine, with Faraday mostly in the role of good cop, with Khan looking on moodily and dropping in the occasional barbed comment but despite the stereotyping, their questioning is effective in drawing information out of Dee. I had a slight problem with these passages due to what struck me as a rather odd narrative convention, with dialogue prefaced with French-style speech dashes rather than UK quotation marks, which left me with a feeling of distance from the interviews, which is perhaps what was intended, but nevertheless was strangely disconcerting.

The other chapters cleverly revealed the growing depth of Dee’s absorption in Felicity, despite her oft-repeated early statements that she preferred not to take long-term jobs, instead keeping a degree of distance between her and her clients and their offspring. I didn’t take to Dee, nor did I take to either Nick or Mariah. There’s little or nothing in their characters to make them likeable or even tolerable. Nick neglects his daughter, and Mariah is too self-absorbed to empathise with the deeply withdrawn and damaged stepdaughter she inherited very quickly after the death of Nick’s first wife.

The only character who comes over as remotely likeable is Linklater, hired by Mariah to research a history of the Master’s Lodging. He’s the sort of seemingly scatterbrained researcher who flourishes in a place like Oxford, existing on the fringes of academia, running a sideline in tours of historic graveyards and other lesser-known Oxford landscape.

The city itself is one of the few characters I didn’t suspect as the depth of Dee’s dysfunctional relationship with all members of the Law family became apparent. With a limited character set – apart from the ones already named, the only other suspect might have been Sally the catering manager – the culprit was either going to turn out to be a total stranger or, more likely, someone known to Felicity. There was a limited pool to turn to, and I formed my own view fairly early on in the narrative. That didn’t stop me reading, though, and Magpie Lane started to turn into train wreck TV for me.

If you like domestic noir, then the book has a lot to recommend it, and missing children are still the order of the day in this corner of the genre. For me, I still remain to be convinced, and in this instance, I found the ending deeply unsatisfactory, especially with a very late instance of a character taking a hard knock on the head from the stupid stick in the interests of the plot.