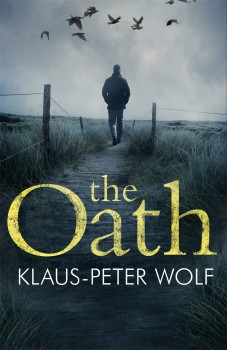 Former chief of police Ubbo Heide is enjoying a peaceful seaside retirement until a gruesome package containing a severed head turns up on his doorstep. Soon a headless body is found on the local beach. However, it is not just one victim.

The Oath’s first pages took me to the idyllic coastal paradise, the most beautiful place on earth, according to Ubbo Heide, a well-respected former chief and genial father figure of the East Frisian Criminal Police. The sea air and fresh bread from a local bakery, the simple beauty of the North Sea … So inviting!
But while Uddo is enjoying a calm retirement, though in a wheelchair, his peace is shattered by the arrival of a gruesome package, containing a severed head. Its appearance on his doorstep catapults him back into a world he had left behind. His wife Carola is in shock. When a torso is found on the local beach, it seems reasonable to say that the body has been reunited. Alas, it’s not the same person because a second head turns up.
Chief Inspector Ann Kathrin Klaasen, assigned to the case, realises that there must be a connection between the two victims. It becomes clear that this quiet seaside community is facing a ruthless serial killer, who is taking justice into their own hands. As the murder investigation stumbles, more things point into Ubbo’s direction when local woman Svenja Moers is kidnapped by Yves Stern.
It appears that Stern bears a grudge against the former policeman who now is a celebrity on the book circuit as an author of extremely popular book, detailing solved cases where the perpetrators escaped the justice system for various reasons because of a lack of substantial evidence or thanks to clever defence lawyers. Svenja was accused and then acquitted of murdering two husbands, and now being locked up in a basement is supposed to be her punishment.
Klaus-Peter Wolf is a German author and screenwriter, best known for his Ostfriesland series of crime novels. The Oath, in Bradley Schmidt’s translation, is the first novel published in English, and although it provides plenty of context it cannot summarise all that has happened in previous nine books of the Ann Kathrin Klaasen series, I would have been interested to get to know the characters from the beginning.
The novel’s elements of hideousness are certainly atmospheric and chilling in parts and there are lots of unpleasant horrible events before the finale, focusing on the twisted mind of the larger-than-life kidnapper who has much greater plans akin to world domination, but starting with the eradication of all criminals in the area, more precisely all those who have not been convicted by the courts. Hence the emphasis on Ubbo’s writing.
However, the investigative team consists of people who in any other crime novel would be dismissed or disciplined at the least. Yet somehow it works here as it showa the contrast between small-town mentality in the close-knit community, the killer’s grand ideas and the professional methods from the big city of Bremerhaven from where the new chief has arrived. This is a boss, though, who cannot exert any authority, while the old one swings between managing the team and pulling back, and a misogynist village idiot who runs wild.  Wolf has a real talent for painting a picture of incompetent individuals who collaborate and even achieve fairly decent results.
I don’t know if the comical mood was intentional but I enjoyed the slightly skewed view of the police work, and the social commentary on the relatively unknown area of East Frisia in northern Germany.  From this perspective The Oath is brilliant with its feel for the area, geography, habits of the locals, food, landscapes and tea-drinking rituals. Minute details describing meals or specific characteristics of the place bring cinematic quality to the narration as the plot weaves its way through.  And for this reason, I was drawn to the locations so affectionately depicted in the background of the hunt for a seriously damaged individual. Or two.