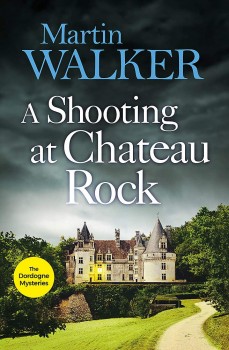 If you want to know how to build a hen house, mate basset hounds and cook all manner of food – and blimey, Bruno cooks veggie for the first time, so it must be the end of days – then Martin Walker’s your man. And you’ll be glad to hear that there’s also a decent crime fiction plot at the centre of A Shooting at Chateau Rock.

Ignore the fact that the title sounds like something out of a cheesy cowboy movie … This is one of the few series that still engages me. Walker is 13 books in and shows little sign of flagging.

The books are deceptively bucolic – they’re not just about a small-town French policeman, his mates and their culinary delights. There’s always a spine of steel running through the plots, provided by French history or international current affairs. This time it’s the tentacles of Russia and the Ukraine.

As usual, the plot is rooted firmly in the Dordogne. A local farmer is found dead, and his son alerts Bruno to the fact his father had signed over his property to an insurance company in return for a place at a luxurious retirement home. Bruno starts sniffing around and discovers links to a Russian oligarch. And an aging British rock star is about to sell his home – the titular chateau – as his much-younger wife wants a divorce so that she can return to the UK. The couple’s son returns for the summer – with a Russian girlfriend in tow.

If you’re a regular with this series, you know what you’ll get for your money with A Shooting at Chateau Rock. It’s brim-full of local atmosphere but this adventure is very slow, as Bruno meanders around markets, builds a hen house for tiresome love interest Pamela, wonders what might have been when high-flying former lover Isabelle arrives from Paris to help the investigation, and conjures up sumptuous meals for his friends. There are also the requisite political machinations, not least from the mayor – who I don’t think Walker has ever named despite his importance to the series. Things perk up towards the end, although there are no real surprises. It’s comfort reading at its snuggliest.

And if you’re wondering what mating basset hounds has to do with the price of oeufs, it’s because Bruno’s loyal pooch Balzac is now old enough to breed from, so he is introduced to the wonderfully-named Diane de Poitiers (she’s the bitch and not the owner, in case you’re wondering!) Tune in next time to find out whether there will be lots of little Balzacs …