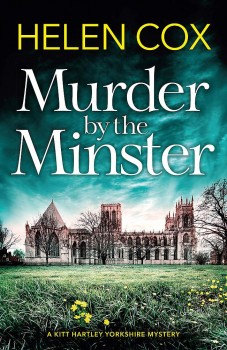 Murder by the Minster

Librarian Kitt Hartley is shocked to hear her closest friend has been arrested on suspicion of killing her ex-boyfriend and sets out to clear her name.

Librarian Kitt Hartley’s normal day at the university library where she works, is shattered when DI Halloran arrives to tell her that her best friend, Evie, has been arrested after her ex-boyfriend has been found dead with a fountain pen stabbed through his heart.

Kitt knows there is no way Evie could kill, let alone a man who she adored even though he had left her with a broken heart. Horrified that the police have got it so wrong, she decides to investigate the murder herself – based on her ‘detective knowledge’ gained from years of reading hundreds of mystery novels from Agatha Christie to Ian Rankin!

The idea of a librarian sleuth at the heart of a mystery series is fine, but Cox’s protagonist does herself few favours. Under the cloak of Yorkshire bluntness, she’s rude, sarcastic, arrogant, mean and thoughtless, dismissing those she considers not as intelligent as she is and willing to drag her assistant into an investigation which could put her in danger from the killer or in jeopardy with the police. She’s only 35, but dresses and has the attitude of a 55-year-old. She claims to have little knowledge of online research – something essential for her position – but apparently graduated during the cyber revolution!

Her protectiveness towards her closest friend is a major point in Kitt’s favour, but I found it difficult to have much sympathy for her. If she had been older, her ignorance might have been a less off-putting. If she’d been more self-aware of her own shortcomings, she might have been a more likeable character.

Having said all that, Helen Cox really knows how to write. There are some lovely descriptions of the city of York; fun references to classic ‘tecs’, such as the work of Agatha Christie, Raymond Chandler, and Sir Arthur Conan Doyle; and the developing romance – a cosy necessity – between Halloran and Kitt is quite well-done.

There are problems with the plot, though. The arrest of suspects on such flimsy and circumstantial evidence breaches every rule of procedure! The victims are drugged, then poisoned with a chemical used in nail polish remover. Obviously – or at least obviously to the detectives – that means the killer must be connected to a nail parlour. But nail polish remover is available over the counter!

Cosy fans may be able to suspend their disbelief and enjoy a story which has an old-fashioned feel despite all its 21st century references. I found it a bit dated with some of the plotting and storyline stretching credulity and unfortunately, I couldn’t.