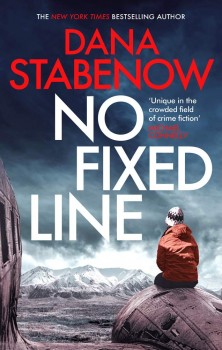 The crash of a light aircraft in a remote Alaskan town has significant implications for PI Kate Shugak and her friends.

The Kate Shugak series now extends to over 20 books. For those who have not met her before, she is Aleut by birth and fiercely protective of a close web of friends in the small Alaskan community of Niniltna.

The book begins with the crash of a small private jet in a blizzard. Two small children, David and Anna, are found alive in the wreckage, and narrowly saved from the cold by friends of Kate who happen to be nearby. The children prove to be Spanish-speaking and from occasional chapters voiced by David we understand the children have become separated from their mother on the way north seeking refuge in the US, and have been abducted for the use of evil men.

Investigation of the crash site reveals a quantity of fentanyl, an illegal drug which has caused many deaths. The amount involved and the use of aircraft suggests a major trafficking operation, and we hear from an unidentified party who instructs subordinates to ensure there are no loose ends from the crash. He gives specific instructions that Kate is to be eliminated if she is involved in any investigation.

Kate has another problem too. Erland Bannister, a man who clashed with Kate and is now dead, has named Kate as the trustee for the Bannister Foundation (BF), a non-profit set up ostensibly to fund projects in isolated Alaskan communities. Knowing Bannister to be anything but charitable, she suspects the BF is a cover for some kind of fraudulent activity, but Bannister has been astute enough to find Kate’s relatives to act as board members who may be compromised if she declines to take up the role.

Kate has resources: she has a computer guy investigating BF files, and her partner Jim Chopin, a pilot, flies her on a tour of recipients of BF largesse. She liaises with various government agencies about the crashed plane and a dead man found in the wreckage. Her enemy has called in the heavies, however, and Kate and her friends face deadly threats before the matter is resolved.

Winter in Alaska calls for efficient cold-weather gear and there is plenty of that here which adds to the atmosphere, although the proprietary names for much of it leaves the uninformed a bit confused at times. The climate also of necessity fosters a spirit of cooperation. Kate has a family-like relationship with her friends and neighbours which is admirable but may be a mite too cosy for comfort if village life is not your preference.

Kate is one tough cookie, if perhaps a little too nurturing for some. There is only one recipe, but you get the feeling that the author had to restrain herself from putting in a few more. I liked Kate’s dog (half-wolf) Mutt, though – she’s a star.