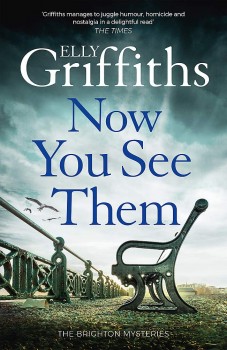 Brighton 1963 and a schoolgirl has gone missing from the exclusive private school, Roedean. It looks like she's a runaway but there are disturbing similarities to the disappearances of a young local nurse and a teenage Modette.

In the fifth of her Brighton mysteries, Elly Griffiths moves the plot on by ten years, from the seedy post-war 1950s to 1964, a year well remembered by readers of a certain age, into an era of mods and rockers; Bank Holiday Monday battles; pimply American teen idols vying for the number one position with the new Liverpool sound and screaming young fans known for the first time as teenagers. It’s a period where homosexuality is still illegal and black faces unusual and possibly alarming.

The story opens at the funeral of one of the previous regulars, The Great Diablo, and sets the stage for the introduction and reunion of the main players – Investigating Officer, Edgar Stephens, now Superintendent and his wife Emma, previously his sergeant and herself ex-Roedean; magician Max Mephisto, ex-Variety top of the bill and now a famous Hollywood actor, and his TV star daughter and national treasure, Ruby. As in all of Griffiths’ books her characters are so well-drawn that this reader is itching to know what happens to them next, so that sometimes it seems as if the plot is incidental!

When a schoolgirl goes missing from a famous private school, at first it seems as if she has just run away to meet her teen idol who’s staying at a famous London hotel. But two other girls have disappeared in the last few weeks and then a body is found on the shingle at the mouth of a seashore cave. When Ruby herself goes missing then Edgar Stephens and Max Mephisto are once again reunited as a crime-solving duo.

As with many of Griffiths’ books the story lines need some suspension of disbelief. Major crimes are investigated by a handful of sometimes not very bright cops. The case of a dead girl is approached with the same degree of urgency as the preparations for the bank holiday mods and rockers invasion, and by the same team. Perhaps that's how it was in the 1960s …

The plot hurtles along and there are continual references to the smoke and mirrors of past adventures until we reach the thrilling finale and the Great Reveal! There are no unnecessary descriptions of place or character, but both are drawn brilliantly and economically. I thought I had spotted the perpetrator fairly early on and, although I could see some of the storylines coming, I can forgive Griffiths almost anything for the way she draws the reader in with her attention to period detail, her wit and elegance of writing.

Griffiths always manages to throw out multiple threads and gather them into a highly satisfactory conclusion, and there are interesting hints of future storylines, both personal and professional, for several of the main characters.