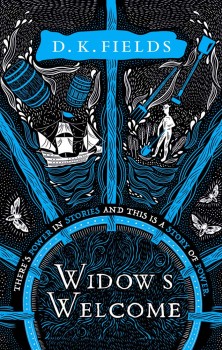 In the United Realms there are no elections, and instead each year the leading group is chosen by picking which of them tells the most compelling story. This year, one of the storytellers is murdered and fear and suspicion grows.

In an alternative world, the United Realms, six nations strive to work harmoniously together. They pick the group that will lead them every five years, by choosing which realm provides the best storyteller to tell a story and be judged by a panel of 50 peers from across the realms. The population follows the process avidly, the lucky ones attend the actual telling and others visit the Hook, where a clue to the content of the story is made public before the event.

This year things do not go to plan. The Wayward storyteller is found murdered in an alley and foul political play is suspected. Detective Cora Gorderheim is set to investigate the crime. She is an unusual character, something of a rebel, quirkily dressed, disabled by an old wound and clearly a person with strong opinions working in a heavily regulated and methodical regime. She resents her new assistant, is beguiled by a charismatic stranger, is supported by her superiors and yet appears to be under heavy scrutiny. Her quest to solve the crime takes her into the political arena of this year’s round of storytelling.

DK Fields – a pseudonym for novelists David Towsey and Katherine Stansfield – has created a vivid and believable world. The descriptions of place, system and character are clearly and interestingly drawn. The concept of the storytelling as a means of choosing the ruling group is odd and yet, in the context of this imagined world, rational and believable. It also provides a very interesting writing device. We, as readers, ‘hear’ two of the stories. The stories are long and layered with meaning and messages and offer intriguing insights into the political climate prevalent at the time.

The plot is interesting with shadows of tales from ancient Rome and Victorian London and yet with a flair all of its own. I found Widow’s Welcome fascinating and am now awaiting the second in the series.