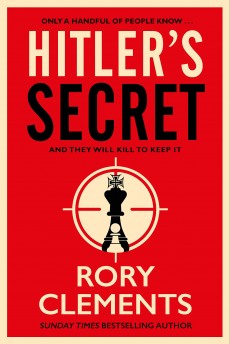 Journalist Rory Clements has placed himself firmly in the front line of historical ‘what if?’ thriller writers with this brilliant fourth book in his Tom Wilde series.

Clements, who apparently abandoned his Elizabethan spy John Shakespeare, for the Indiana Jones-like Wilde – a widowed, good-looking, motorbike-riding, Cambridge-based American professor specialising in Elizabethan espionage history – has hit the target with this dramatic, twisty and intelligent thriller, by far the best of the series so far, but equally an ideal standalone.

In the autumn of 1941, with the Nazis controlling western Europe and at the gates of Leningrad while America remains officially neutral, Wilde is asked by his country’s intelligence service to smuggle an unspecified package out of Germany. All he is told is that it is so secret even Hitler doesn’t know of it, but success would allow Britain and its yet undeclared American allies to undermine the whole basis of Nazi control.

In Berlin, posing as a German-American industrialist, Wilde soon discovers the truth – and why Martin Bormann, the shadowy, powerful head of Chancellery, the administrative machinery of the Nazi Party, will do anything to stop him.

Wilde acquires the ‘package’ and much of the story involves a chase through north German forests and plains to reach the coast and take ship for the neutral haven of Sweden. This involves contact with many Germans, leaving him constantly worrying who he can trust. It also gives Clements the chance to highlight the political polarisation and mistrust, underlaid with a simmering violence which was to culminate in the 1944 assassination attempt on Hitler.

This colourful and meticulously researched history lesson, which deals with Hitler’s personal life rather than politics or the events of World War II, features many real characters. It is also a gripping spy thriller with unusual and well thought through plot twists from the start. Hitler’s Secret is more linear and straightforward than earlier Wilde stories, and generates a real atmosphere of fear as well as offering a classic moral dilemma.

As Wilde realises the secret he has uncovered must never be revealed – even if it means effectively opposing the plans of his own country’s intelligence service – the fast-paced story moves to a dramatic climax amid the historical background of the university city which is his home.

Clements has an immaculate grip on time and place, blending both effortlessly with an all-action, fast-moving, but complex plot. He is far too good a writer to allow the reader to get too settled before the story races off in a new direction.

A cast of colourful characters, a plot rich in deception and intrigue and a tangled web of espionage and murder offer first-class entertainment for fans of historical ‘faction’, spy fiction or action thrillers. This is another triumph for the decent and moral Tom Wilde and a great book from a fine writer who brings the urgency of a news story to the framework of the novel.