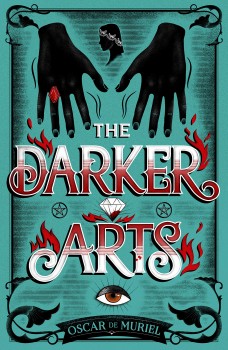 Oscar de Muriel’s conflicting and conflicted duo of paranormal investigators, ‘Nine Nails’ McGray, the foul-mouthed hard-drinking Scot permanently on the edge of violence, and the louche and patronising college-educated London gentleman Ian Frey with his love of logic and correct procedure, face the toughest case yet with the life of McGray’s most trusted clairvoyant at stake.

Madame Katerina is the only survivor of a séance she had held for six members of three of Edinburgh’s wealthiest families. Her only defence is that she is certain a tormented spirit killed the families for revenge. McGray, even though he believes her, must find a rational explanation that will convince a jury. Frey, still trying to deal with the loss of his uncle is, as usual, sceptical and at first offers little help with what appears an impossible puzzle. McGray must accept either something truly supernatural has happened – or uncover both motive and means for a fiendishly clever plot to disguise a very human killer.

In what is essentially a new twist on the traditional locked-room puzzle, this fifth story in the series is without doubt de Muriel’s best. It’s a hugely entertaining Victorian mystery, a properly creepy and Gothic mix of horror, history, and humour, and has everything you need to keep you turning pages.

No matter how strange or creepy the setting and narrative, the main reason for the popular success of this unlikely pair, who form the Commission for the Elucidation of Unsolved Cases Presumably Related to the Odd and Ghostly, is the quality of De Muriel’s writing, his willingness to use often robust humour – and a firm basis in truth and easily established scientific fact.

The Mexican-born, Manchester-based chemist and translator bases each completely convincing tale in an area in which he has particular expertise. It is always worth reading his author’s notes, both to inform and partly explain the basis of the mystery. He never overdoes the supernatural and frequently offers eminently possible explanations, all of which turn out to be red herrings. But in a late 19th century world where news travels at the pace of a horse, everything and anything seems not only believable, but also quite likely.

As usual, his characterisation, even of the minor players, is perfect, and he maintains the mood of danger and eeriness throughout. The interconnected families at the heart of this outrageous crime are at war. Children have been orphaned and mothers have lost their children. The impact on their lives is devastating and they fascinate every bit as much as McGray and Frey.

The relationship between the two protagonists, in the past often spikey, is continuing to warm, as McGray, a rough, tough Scottish copper, comes to appreciate the strengths of his colleague Frey, despite the drawbacks of his essential Englishness, while Frey is coming to realise there is a place in detection for occasionally more direct action and that not everything can be logically explained.

The atmospheric, moody and dark setting of late Victorian Edinburgh is impeccably drawn. The story is at times melodramatic, set around the séance – essentially an act of theatre, The main actor Madame Katerina is hard to know, but the reality that an inflamed public opinion wishes her to face the hangman’s noose offers tragedy and pathos to match the melodrama and superstition.

It is all gothically over the top – and gloriously preposterous – but nevertheless a hugely enjoyable, entertaining and well-written historical mystery romp.