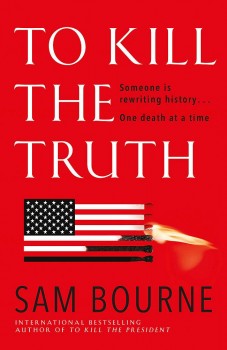 To Kill the Truth

On Holocaust Memorial Day this year a survey showed five per cent of UK adults do not believe the horrific slaughter took place – and one in 12 believes its scale exaggerated. Almost two-thirds of those questioned could not say how many Jews were victims of the Nazi genocide or grossly under-estimated the number.

That one fact makes Sam Bourne’s topical, morally serious and chillingly plausible conspiracy story an absolute must-read. This convincing and prescient warning may be fiction, but many of the factors are already present to make it come horrifyingly true.
Bourne is the pseudonym of Jonathan Freedland, a journalist and broadcaster, and a former Washington correspondent for the Guardian.

This taut and authoritative tale takes the reader to the borders of a world without truth in which history will be re-written by those who live to shape it. In Trump’s America, someone is trying to destroy all evidence of history’s greatest crimes. Academics and Holocaust survivors die in mysterious circumstances. Around the world, museums and libraries containing irreplaceable documents recording mankind’s religious and political past burn. Digital back-ups are destroyed, lost for ever.

As Black Lives Matter protestors clash in the courts and on the streets of Charlottesville, Virginia, with slavery deniers – the university town was the scene of riots in 2017 when ultra-right groups tried to stop a move to take down a statue of Confederate General Robert E Lee – America is on a knife-edge and time running out. A new Civil War seems possible, but who stands to gain most from the chaos?

Feisty and determined Irish-born former White House aide Maggie Costello has sworn off politics. But when the first black female Governor of Virginia seeks her help, she knows the rapidly expanding situation is bigger than any political game.

This cautionary tale raises the interesting intellectual concept of whether many of the world’s problems exist because of history and whether modern conflicts are affected by memories of past wars, long-gone people and historical events which history does not let us forget.

Much of it rings true and Bourne’s fast-paced plot ties this to the technology which affects our everyday life, such as the ability to remotely control heating, electrical or fire prevention systems, or the electronic storing of information which allows us to Google anything we require.

There’s almost too much in this story – alt right terrorism by technology, viral attacks on search engines, technological hijacking, faking videos, murder – but it is held together by the character of Maggie and her almost lone race to stop the ‘Bookburner’.

It is impossible to project Bourne’s chilling vision without reference to politics and in an excoriating attack on Donald Trump, he makes it clear that, in his opinion, the shameless occupant of the White House is bringing the scenario ever closer.

Bourne’s take on the view expressed by a right-wing former White House aide that a healthy democracy, a free press and ‘all that crap’ are anathema to those running the show may sound like the whining of a leftie liberal intellectual which, given Freedland’s own background, could be seen as a reasonable assumption. But I – and most readers – given the political situation on both sides of the Atlantic, whatever our beliefs, will realise the truth of his charge.

The first half of the stunning and chilling story is the more gripping, full of suspense and gravitas. Maggie spends the second half of it in a rather unusual setting! This is both a brilliant and important book laying out the devastating effect if Bourne’s clever conspiracy ever becomes fact.