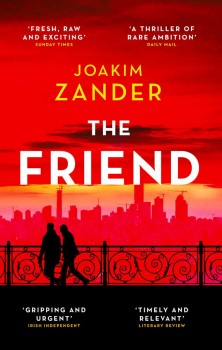 Jacob Seger, a new recruit to the Swedish diplomatic service in Beirut, meets Yassim at a party and falls under his spell. But is Yassim the photographer he claims to be, or is he mixed up in something far more sinister?

Jacob Seger is a Swedish intern sent to Beirut on his first job, full of aspirations. Almost immediately he meets Yassim, and the two fall into an affair. Yassim’s frequent absences frustrate Jacob, but are put in a far more worrying light when a woman called Myriam tells him that Yassim is an ISIS terrorist. She demands that Jacob report on Yassim’s movements, threatening to publicise a video of his sexual activity if he does not.

Back in Sweden, lawyer Gabriella and political analyst Klara are reunited at a funeral for Klara’s grandfather. The pair once combined forces to expose Russian activity behind riots in Sweden and the complicity of Sapo, the Swedish security police. On their return to Stockholm Gabriella is arrested for reasons unclear; Klara goes on the run, assisted by George, an old colleague with whom she quickly establishes a mutual attraction. The pair are being shadowed by men who they identify as Russians.

In Beirut, Jacob challenges Yassim, who claims to be gathering material about war crimes. Anticipating interception, he persuades Jacob to return to Europe carrying crucial evidence. Jacob has no contacts to advise him on distribution of the material, but finds details of Gabriella on the internet. Once back in Sweden he calls her to arrange a meeting, unaware that she is already in police hands. Luckily Gabriella has already passed details to Klara and George, and the three are able to join forces.

The above gives only the briefest outline of a complex and fast-moving plot, developed by short punchy chapters alternating between events in Beirut and Europe. Uncertainty about Yassim’s motives and the roles of various shadowy groups glimpsed around the protagonists persist to the last pages, and every chapter seems to end with a startling revelation, disaster or other sensation.

The drama is enhanced by the apparent unfitness of the two key players, Jacob and Klara, for the pressures they face. Jacob is a fresh-faced youth with few resources, forever busting into tears as it all becomes too much for him. Klara is similarly lachrymose, and also prone to panic attacks. While one understands the author’s wish to stress the challenges faced by the protagonists, their continued survival does tend to challenge credibility.

The Friend is a follow-up to The Swimmer and The Brother which feature some of the same characters, particularly Klara, but lack of detail on previous events is no impediment to someone coming new to the series. The continued theme of Russian stirring of disaffection in Europe is certainly very topical, and with non-stop action and memorable characters the book could appeal to a wide audience.